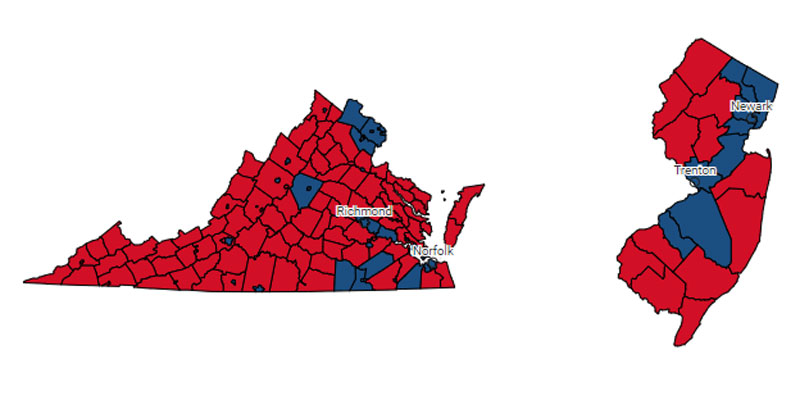 Could a GOP wave come to Rhode Island?

Waking up to the two election maps, from Fox News, shown in the featured image for this post, the question that comes to a conservative Rhode Islander’s mind is:  Could it happen here, too?

I’d make the case the #NJGOV results are more alarming for Dems than #VAGOV.

But can we be honest with each other?  No, it probably couldn’t happen in Rhode Island, at least not yet.  Even a wildcard candidate requires some infrastructure and a reasonably organized base to tap into, and that’s been crushed and dispersed in Rhode Island.

We’ve had our sparks in recent months.  With the exception of Loudoun County, Virginia, no area of the country has drawn more attention for the misbehavior of schools and school committees than Rhode Island, yet no broad movement has formed.  Despite the bravery and good work of Nicole Solas and Ramona Bessinger, which has brought them to national attention, the local media feels it can ignore them.  The same is true of the healthcare workers and Unmask Our Children protesters who are following Democrat Governor Dan McKee around.

The problem is the general public is bought off or demoralized in the Ocean State, and when people do look to engage, there’s no single hub for them to plug into for a reliable lay-of-the-land explanation and direction.  That absence of gravity also means that individuals and small groups are too easily able to splinter based on any small personal or policy disagreement.

The political right in Rhode Island has to make a conscious decision not to walk away from each other because this person is a RINO or that person is too MAGA — and do so in the face of strong efforts from the establishment, the news media, and even neighbors to insist on it.  The only question is whether that other person is better than a complete radical takeover of our lives.

One consequence of Republican successes elsewhere may be that run-of-the-mill Democrats across the country will be reluctant to play along with the progressives over the next year.  That will leave a ton of money and pent up energy looking for an outlet, and so we may see an even worse assault in the Ocean State as the war’s fronts in other states quiet.

If this does happen, our statewide battle will be between more-moderate establishment Democrats and radicals.  The conflict will become more visible, and therefore generate more energy to resist, but the lack of structure for resistance will be a problem, especially if the establishment Democrats leave municipalities as an offering to buy good will from progressives.  The local news media will sacrifice their own financial interest in covering conflict wherever they can find it to help them make the deal.

That said, this isn’t a pessimistic post.  There’s a great deal of energy out there, even in Rhode Island, and it can be well directed.  The key will be to focus local while working together over town lines.  Find any people who agree on any area of politics and policy and work with them, from rural villages to the heart of Providence.  When it comes down to it, we’re all in this together.  Anchor Rising is certainly here to help.

People willing to run for office should focus on town/city councils and school committees.  Local races require less infrastructure and can be won simply with effort.  No news media required.  Newly engaged people can learn the ropes and experience the push and pull of politics on a small stage interacting with neighbors.  Focusing local will also expose many of the problems of political infrastructure that need to be repaired while providing a network from which to catch and highlight issues of concern to pull the engagement up the government ladder.

Theoretically, a red map might be possible in Rhode Island next year or in 2024, but however quickly it happens, the basics are a prerequisite both to win and to accomplish anything positive once we’ve done so.