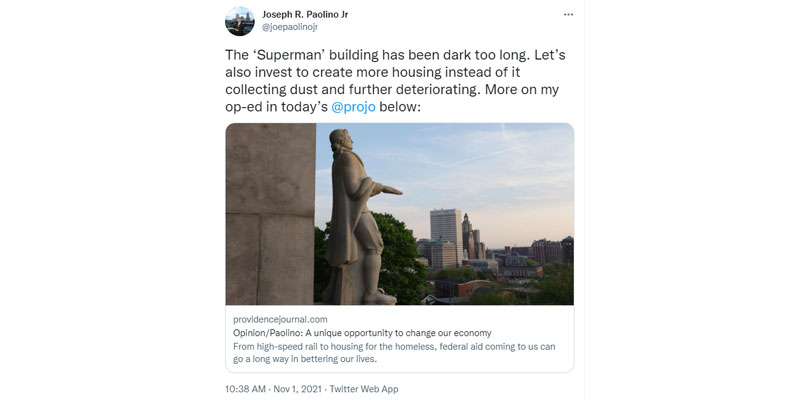 “Iconic” landmarks can’t be decorations on a stultified state.

One of my children is learning the standard single-axis political spectrum (no doubt in preparation for the AP test down the road), and the fortunate child enjoyed a free lesson on how inaccurate that is all the way home.  I’ll spare you, dear reader, that experience, simply pointing you to the circular political spectrum I developed quite some time ago, and which I continue to think holds up pretty well for explaining reality.

One common (and inaccurate) characterization is that conservatives (equated with Republicans) want things to stay the way they are.  Liberals and progressives want change; conservative want no change; “comfort with change” sounds better.  A moment’s consideration of how we think of “conservatism” in the aspects of our daily lives shows how off-the-mark that presentation is.  You can be conservative in your investments and still invest.  Indeed, failure to invest is not conservative at all.

This topic was still on my mind when I came across a Twitter conversation between Joe Paolino (a former Democrat mayor of Providence) and John Loughlin (a former Republican state representative from Tiverton).  It began when Paolino added the Superman building to his wish list for spending the federal COVID windfall and proceeded as follows:

Paolino: The ‘Superman’ building has been dark too long. Let’s also invest to create more housing instead of it collecting dust and further deteriorating.

Loughlin: If this was a viable, cost effective and profitable project, why has no developer stepped up to make it happen? Why must the taxpayers always be the ones who get the short end of the proverbial stick?

Paolino: all tax payers and citizens benefit from saving superman building from demolition . Historic, iconic buildings like that still have a use. Housing is the only viable answer and to have a component be set aside for affordable benefits all .

Loughlin: Then taxpayers should receive all profits until such time as the “investment” is recouped in full with interest.

Now, Paolino is generally considered a relative conservative or moderate Democrat, but this is by Rhode Island standards.  After all, his approach to using the federal money is entirely to-down leveraging of government to make decisions for the future of our state rather than, say, simply repairing basic infrastructure and lowering taxes.  That is, he’s fundamentally a progressive, albeit not a radical one, yet he’s the one who wants to make sure that an “iconic building” is preserved.

Serendipitously, I also came across a tweet showing aerial photos of Havana, Cuba, on which Antonio Garcia Martinez commented:

Present-day Havana. Not a single building you see was built under communism. It’s a society utterly living in the ruins of its capitalist past.

Communists froze Havana in place when they came into power, and that was entirely predictable.  After all, communists, socialists, and progressives are defined by wanting powerful people in government to make decisions for the society.  Thus, when they take power, keeping it is the top priority, and the dynamism of change creates opportunities for other people to gain power.  In the West, at least, that dynamism is exactly what conservatives want to conserve.  That’s why we’re for free speech, free markets, freedom of religion, federalism, and so on.  The contrast is that the system we support gives money and leverage to people who accomplish things that we all get to enjoy.

The conservative vision is to get the government off the economy’s back so Rhode Island can return to the type of prosperity that leads to the construction of new iconic buildings.

We can let this one go.  The Ocean State will get over it.