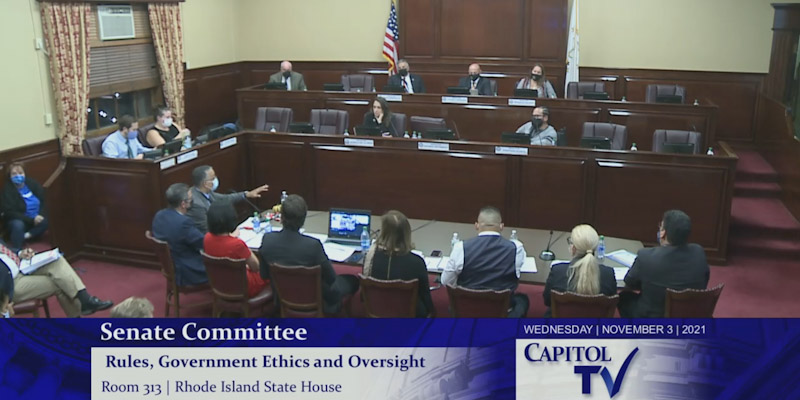 Mark the General Assembly down with the teachers union as unserious about Providence students.

Zack Scott, the deputy superintendent of operations, told the Senate committee Wednesday only nine departing teachers had responded to exit surveys sent out by the district, prompting a teacher from the audience to shout out that the surveys had been sent to email accounts they no longer had access to. …

A packed audience of teachers repeatedly laughed when Scott was unable to answer the senators’ questions, including about how many Providence teachers had left and how many applicants had been interviewed for jobs amid the shortage.

We’ll assume Machado’s assessment that the crowd consisted entirely of teachers is accurate, although it is strange that she would assert that the person “shouting out” was, specifically, without having asked (or have granted anonymity if she did so).

The dominant information these paragraphs provide is that the hearing was handled with the typical teachers union strategy of unprofessional disrespect.  Laughing at an administrator simultaneously affects his emotional state and performance while also conveying to the elected officials and any other interested parties (like news reporters) what their response should be.

With that information, the reader can’t help but wonder whether anybody involved in the hearing (or reporting on it) remembers why the state took over Providence schools in the first place.

Two years ago, the Providence district was nationally recognized as a massive failure for students.  How should we envision the necessary changes would play out?  Did legislators expect the many people whose accustomed behavior was causing the damage to simply go along with a comprehensive fix with smiles on their faces?

In these cases, the concern should not be that many teachers are no longer happy with their jobs and are leaving.  Their departure might be a good thing.  To know whether that is the case or not, one first must know whether the administrators are making beneficial changes.

That is why a question from Democrat Senator from Smithfield Stephen Archambault might have been on the right track if it weren’t so probable he was simply playing to the jeering union audience.  Knowing why teachers are leaving is an important part of evaluating whether policies of reform are causing the right teachers to leave.

And that should be the focus of these inquiries:  not whether teachers are happy, but whether the state has a credible plan and is deliberately implementing it.  That part isn’t at all clear.

If that were the case, administrators might not need a policy of exit interviews.  They would already have a basis to judge whether the teachers were the ones who weren’t willing to do the necessary work of reform.  Then they could interview any counterproductive surprises in order to tweak the plan to avoid regretable losses going forward.

Saying so in a public hearing would, of course, produce a new wave of shouts and jeers from the “packed audience,” as well as objections from the union-dependent elected officials at the front of the room.