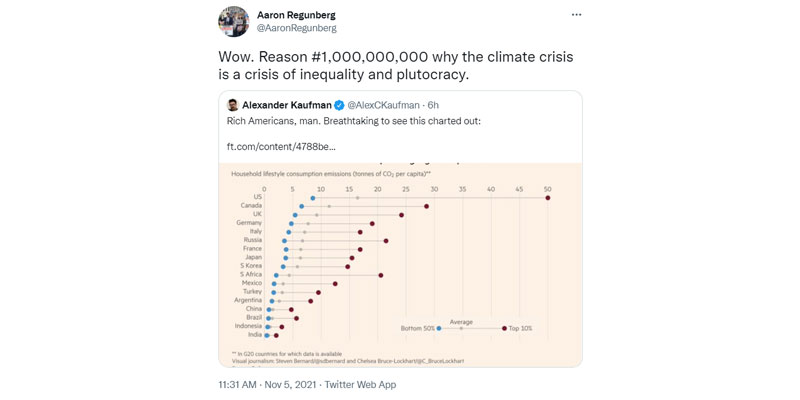 Unfortunately (or fortunately, depending on the reason and one’s perspective), Aaron Regunberg deleted the tweet shown in the featured image of this post before the time of this writing. His anti-American and anti-capitalist word-association response, however, is still worth pondering.

The image is of a chart from an article in Financial Times by Alex Kaufman that purports to show that the United States, particularly its top 10% of income holders, far outstrip the planet in their production of CO2.  Here’s Regunberg’s reaction:

Let’s be charitable by giving Regunberg the benefit of the doubt that he deleted the tweet because his brain soon caught up with the complete foolishness of his statement.

Only an ideologue could miss the fact that one of the apparently best performers on this chart is China.  You know, the country that is by far the biggest polluter on the planet, and which still has slavery of the direct, not-just-lower-paid-self-deciding-employees kind.  I won’t attempt to understand how China’s good performance on his chart (let alone India, which has a massive pollution problem as well as a caste system) could support Regunberg’s contention.

Since the first and third worst polluters on the planet are the fourth-best and best performers on this chart, it seems extremely likely that the most-decisive factor is that the chart is per capita.  That is, the United States looks bad because our average resident is wealthier, and wealthier people do things that generate more CO2 than, say, sifting through garbage piles for edibles.  Note that this is true for the top 10% and for everybody else.  I’d say, hooray for the U.S.A.!

Another factor that surely plays a role is the size of the country.  Notice Canada’s position.  In a larger country, people need to travel more to get around.  That includes the average commuter as well as Regunberg’s progressive friends, who jet around the world to climate conferences that would be conducted via Zoom if the real purpose weren’t to rub elbows and enjoy the high life.

Regunberg’s tweet and Kaufman’s article are simply attempts to cram climate alarmism into their proven mold of envy-stoking.  Rich people are killing the planet!  You must vote for policies that restrict them and transfer money to you (and give money and power to us)!

One suspects that restricting the rich and enriching the working class wouldn’t quite be the outcome if progressive achieved their goals, but it’s the pitch.  And this chart, along with the message that Regunberg overenthusiastically picked up, shows the level of nuance brought to the discussion by those who would use fear to seize power.