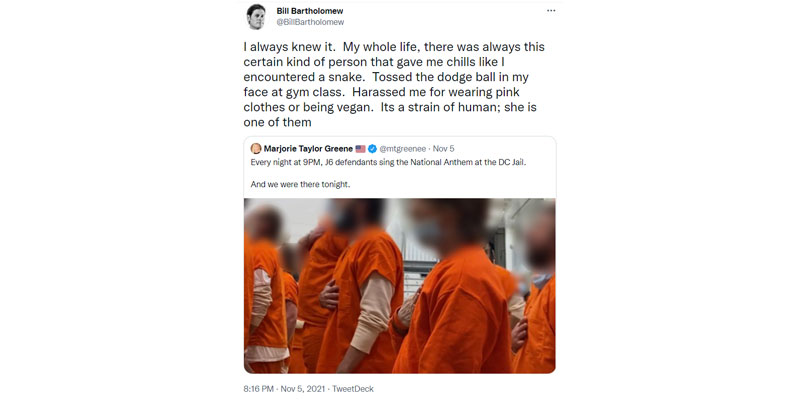 I always knew it. My whole life, there was always this certain kind of person that gave me chills like I encountered a snake. Tossed the dodge ball in my face at gym class. Harassed me for wearing pink clothes or being vegan. Its a strain of human; she is one of them

On one level, I get it.  Before I came to my senses, I fancied myself a progressive rebel and wore clothes that drew conspicuous attention.  (Nothing pink, of course, but pants painted with psychedelic imagery, for example.)  One has to understand while making such decisions that when you wear clothes and proclaim positions that you know will be provocative, people will be provoked.  That doesn’t make the dodge ball bullies and harassers right, but it does make them not not human.

That’s the disturbing part of Bartholomew’s tweet, and it has a representative feel to it, as something that is common among people who share his beliefs.  Language like “a strain of human” who gives you “chills like [you] encountered a snake” evokes sci-fi horror imagery.  And what do the protagonists of sci-fi horror stories typically wind up doing to the monsters they encounter?

Rader freely admitted that the Left had little interest in treating individuals fairly; it wanted to settle the issue of “justice” between groups of people. “One of the differences between this generation and revolutions, say, of the nineteenth century, is we’re not interested fundamentally in equality. We’re fundamentally interested in justice, which means we have greater tolerance of liquidating a class,” he said. [Conservative intellectual Arnold] Beichman immediately interjected, “We’re talking about murder. This is the way people get categorized. A class – Jews, Catholics, and gypsies. You don’t see people. You see Jews, Catholics, and gypsies. … When you talk about the word ‘class,’ don’t you see people? Is it that fixed that you can say, ‘You are to be shot, and you are to live?’ And who the Hell are you to say so?”

They want “equity,” not “equality,” and that means some people have to suffer, perhaps even die, and that requires seeing those who oppose the Left as non-persons, which brings us back to progressive Democrat state senator Kendra Anderson and that creepy scene from Silence of the Lambs.  You’ll recall that when the kidnapper-murderer’s victim starts crying that she wants to go home and see her mommy, he visibly struggles to maintain his cold “it puts the lotion in the basket” veneer.  To do what he thinks must be done, he has to see her as an “it” — at best, “a strain of human.”

In our continuing conversation, Bartholomew cited “anarcho-syndicalism in Franco Spain” as the closest system to what he desires, although he does insist he shrinks from the violence of the Spanish Civil War.  His faith, however, is in the proposition that “there is a way for population to control the levers of production, ensure baseline equity, and still encourage and reward scientific, artistic and other advances via competition.”

Important word, that:  “control.”  Conservatives tend to want a guard-railed, but uncontrolled system, in which various interests balance out organically, which seems to work well for everybody but system-disrupting radicals.  Legal equality and regulated freedom are how the “population,” which is a community of unique individuals, “controls” those levers.  Folx like Bartholomew, though, need the word to be literal.  Somebody has to be “in control” and making decisions, somehow.

There has to be a gym teacher to send the dodge ball bully to the vice principal’s office, because otherwise that evil strain of human may use his equal standing within the rules of the game to win.  The danger arises when a charismatic figure comes along to convince people that they are the ones they’ve been waiting for.

[…] the America flag is a symbol of hate and racism, especially when flown on trucks.  Some Americans get the creeps from the idea of prisoners’ singing the national anthem together.  And some are proclaiming […]