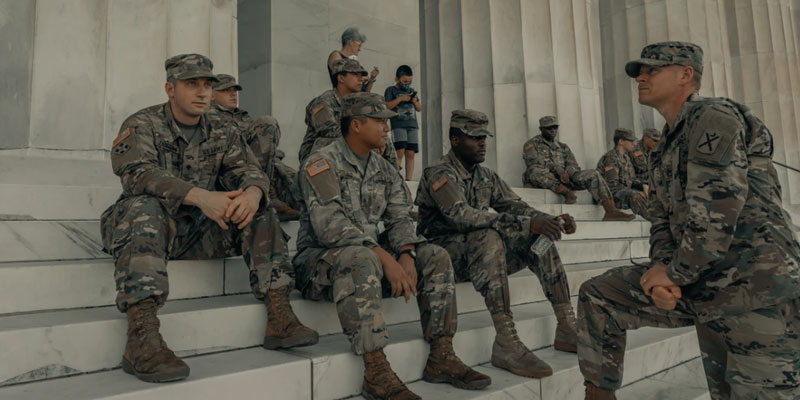 One major point of concern in recent years for anybody who cares about the future has to be our diminishing agreement about patriotism.  In the past few years, radicals have increasingly mainstreamed the notion that the America flag is a symbol of hate and racism, especially when flown on trucks.  Some Americans get the creeps from the idea of prisoners’ singing the national anthem together.  And some are proclaiming that the judge’s (potentially) having a patriotic ringtone on his phone should be grounds for a mistrial in the politically charged Rittenhouse trial.

Patriotism should be a valuable core of common ground.  Even if we disagree about what makes the United States of America special, the notion that there’s something good about our country is a personal connection.

Nowhere is this point illustrated as well as in the armed forces.

Even in our times, a black enlistee may join with a love of country related to emancipation while a white enlistee joins with a love of country related to Southern heritage.  Getting them to see how these two sources of patriotism relate to each other (certainly after terrible and tragic misconceptions and mistakes, as well as painful corrections) is a project of healing that relies on this unifying commonality.  Put differently, it is the project of the United States of America — a country founded not on racial, ethnic, religious, or traditional identity, but on the ideas of equality, freedom, and self-government.

We can (we must) get back to that project, and Veterans Day offers an opportunity to start from the best beginning point for any project: gratitude.

Thank you simply for saying “yes.”  Whatever your circumstances as a veteran, and whatever our views as citizens:  thank you.