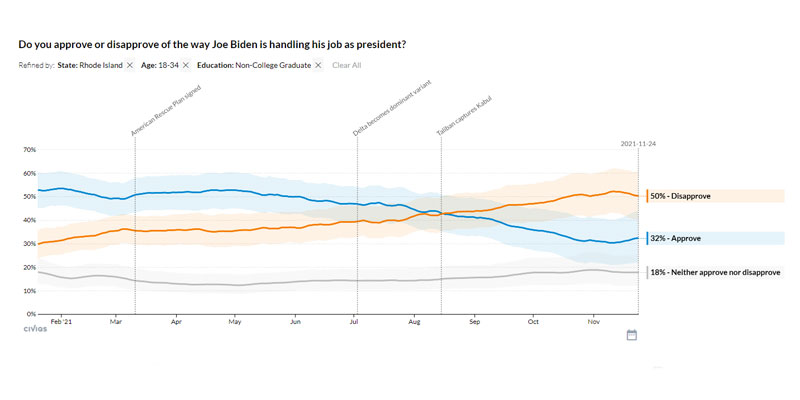 Biden’s unpopularity can be a guide in Rhode Island.

Via Stacey Lennox, who looks at Biden’s approval/disapproval ratings across all states for PJ Media, comes a fascinating tool that may prove useful in the toolboxes of anybody who writes about or engages in politics.

It’s an interactive poll tool from Civiqs that allows the user to cut up the data by various demographics in one of the most-comprehensive ways I’ve ever seen for this sort of tool.

The link above shows the trendline for Biden from election on, and it isn’t pretty.  Although the picture has improved a little over the past couple weeks, he’s currently underwater by 16 percentage points, with a 53% majority disapproving.  In fact, the percentage disapproving is larger than the percentage approving for every age group, every education level, and both sexes.  Only among Democrats, minorities, and seven states is he above water.

Rhode Island isn’t one of those states, and if you click on the state’s name on the left-hand sidebar, the tool resets all of the charts for the Ocean State.  Here, he’s only under water by one percentage point (45:44), but that’s a relatively recent reversal, after his high of 57% approval in April.  In Rhode Island, Biden picks up plurality approval from people over fifty, postgraduates, and women.

It’s interesting that disapproval is strongest among younger groups.  Click for the 18-34 group, and you see disapproval at 48%, over 35% approval, and that’s with a bunch of Democrats who appear reluctant to say anything more than “neither approve nor disapprove.”  Somewhat surprisingly, Biden hits 50% disapproval among non-college graduates, which would include the youngest portion of the group as well as the working class.  Note that for all age groups, the non-college graduate disapproval is 47%, so the youth factor appears to be more relevant than the “working class” experience.

Among the young, Biden loses women, and male disapproval hits 59%.  He also loses ground with minorities.  Among all black Rhode Islanders, his approval:disapproval is 61:22; among Hispanics/Latinos, it’s 60:29.  Under 35, that drops to 41:35 and 50:33.  Narrow the picture to non-college graduates, and he nearly loses blacks, at 39:36.  He actually does lose the young men in this category, who disapprove by 43% versus 40% approval.

There may be some opportunity to shift voters, here.  After all, the same results for Donald Trump weren’t inverted.  They disapproved of him more strongly than their elders, too.  The disapproval of Biden isn’t just a reflection of partisan leanings, in other words.

What that means, I don’t know, but I’ll be digging into all of Civiqs’ results to see if I can figure it out.