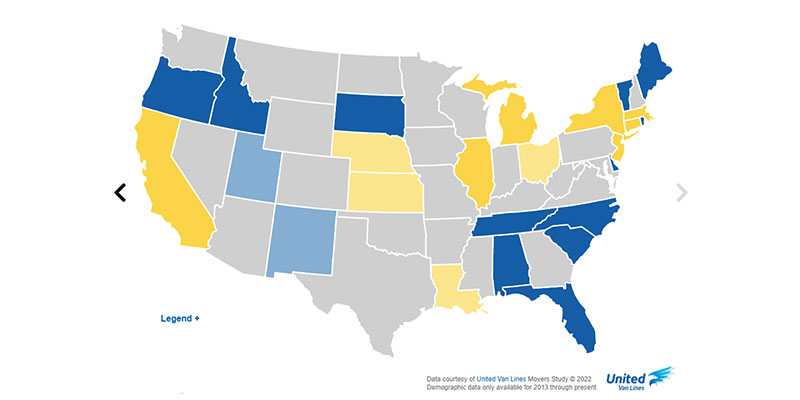 Who’s on the move into and out of Rhode Island?

For the second year running, United Van Lines’ study of its customers finds Rhode Island to be have more people moving in than moving out.  In fact, percentagewise, Rhode Island was the tenth-most-inbound state.  What’s going on?  Has the Ocean State somehow become a population draw?

This particular data isn’t well enough defined to get into specifics, but probably not.

For one thing, Rhode Island isn’t the only state seeing an inflow, and clicking back through prior years, the trend appears to be that the inflows began when Massachusetts and Connecticut really began to see outflows.  Much of it could be intraregional circulation.  Put differently, it may be nothing we’re doing right, but rather things we’re not doing as badly as quickly.

Looking into the details is useful, too.  Under “primary reason for moving,” jobs play a big role in the traffic on both sides of the highway, and each has one other category that is close.  The difference is that, inbound, the other big reason is family, whereas, outbound, it’s retirement.

That probably explains why those leaving Rhode Island skew heavily to age ranges above 55, while those coming spread out across age ranges more evenly.

The real key to understanding, however, may come with income.  In both cases, people with income above $150,000 are by far the most likely to move, but inbound families are more heavily skewed toward high income, with a much smoother curve in that direction.  Outbound traffic is a little more evenly distributed toward ranges under $100,000.

However, the fact that both sides are so imbalanced toward the high end suggests that something else might be going on, here.  We have to ask ourselves who uses United Van Lines?  This is a big moving company with big trucks, so their customer base is probably not representative of all movers.

Indeed, for years, I’ve repeatedly found that the people leaving Rhode Island have been those without a great deal of money.  Generally, when Rhode Islanders begin forming families and looking to turn their potential into income, that’s when they leave.  Such people don’t need big fancy moving companies.

Indeed, looking to a related report from competing company, U-Haul, proves the point.  This company, which, as its name suggests, mostly provides trucks so people can save money by packing and transporting their possessions themselves, puts Rhode Island at 32nd for net in-migration.

Put it all together, and it looks like Rhode Island might do fine attracting wealthy middle-aged people from neighboring states who move for jobs and family and may be taking the jobs and homes of the retirees who are fleeing the state, while losing younger people who are trying to build a life.

If that’s the case, it doesn’t bespeak dynamism, which indicates both a likelihood of eventual decline and an opportunity for fantastic improvement.