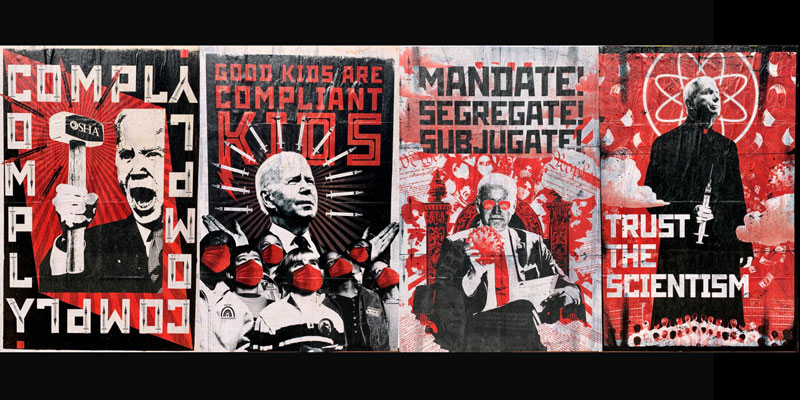 Rhode Island Democrats, is this you?

As expected as it probably should be, I have to say I’m still a bit surprised by these survey findings:

– Fifty-eight percent (58%) of voters would oppose a proposal for federal or state governments to fine Americans who choose not to get a COVID-19 vaccine. However, 55% of Democratic voters would support such a proposal, compared to just 19% of Republicans and 25% of unaffiliated voters.

– Fifty-nine percent (59%) of Democratic voters would favor a government policy requiring that citizens remain confined to their homes at all times, except for emergencies, if they refuse to get a COVID-19 vaccine. Such a proposal is opposed by 61% of all likely voters, including 79% of Republicans and 71% of unaffiliated voters.

– Nearly half (48%) of Democratic voters think federal and state governments should be able to fine or imprison individuals who publicly question the efficacy of the existing COVID-19 vaccines on social media, television, radio, or in online or digital publications. Only 27% of all voters – including just 14% of Republicans and 18% of unaffiliated voters – favor criminal punishment of vaccine critics.

– Forty-five percent (45%) of Democrats would favor governments requiring citizens to temporarily live in designated facilities or locations if they refuse to get a COVID-19 vaccine. Such a policy would be opposed by a strong majority (71%) of all voters, with 78% of Republicans and 64% of unaffiliated voters saying they would Strongly Oppose putting the unvaccinated in “designated facilities.”

The shocking part isn’t only the objective fascism of so many Democrats, but the huge contrast from Republicans and independent voters.  How did that party get so extreme?

Some might object to my use of the “f” word in the paragraph above, arguing that there’s a difference between concentration camps filled with people because of their race and those filled with people because they’ve refused a vaccine, but from what I can see, the burden of proof falls on those who would draw the distinction.  Recall, for one thing, that people who disagreed with the politics or worldview of the ruling regime have been sent to such places.  For another thing, consider how fanatical and unforgiving that regime has become:

A California Christian preschool director has been barred from ever working with children again after she ‘failed to encourage’ two-year-olds to wear face masks in class.

Tiffany McHugh, the director of Foothills Christian Church Preschool in San Diego, had her license stripped after the Department of Social Services shut down the preschool because McHugh couldn’t get students to keep their masks on.

If you find yourself agreeing with these extreme measures, please step back a moment and reconsider your position.  If you find you continue to feel the same way, it’s vitally important that you figure out how far will be too far so you’ll recognize it when it comes.

Featured image by an anonymous artist via Washington Examiner.

What is shocking here? It is in the nature of Democrats that they want the government to “take care of them”.