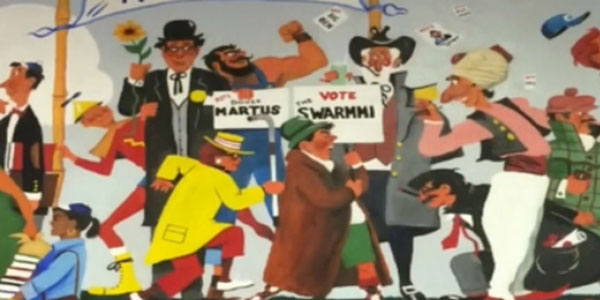 What is URI president Marc Parlange covering with his wokeness?

Maybe some people collect them or leverage them for some purpose or other, but honorary degrees from colleges and universities have always seemed pretty useless and ceremonial to me — like a certificate to thank a person for participating in an event.

With the latest radical move from the University of Rhode Island’s new president, recently imported from Australia, I’d say honorary degrees have become something worse than useless.  Accepting an honorary degree from URI now gives ideological fascists a whip with which to embarass you someday if the political winds shift:

The University of Rhode Island’s new president is asking the board of trustees to revoke the honorary degrees awarded to Michael Flynn and Rudy Giuliani because the two men no longer reflect the institution’s values and standards.

Well, I’ve got an earned degree from URI, and the institution clearly no longer reflects my values.  In sharp contrast with the prior two presidents, since he arrived, Parlange has gone on a hard-left sprint.  It’s anti-intellectual, ideological, and embarassing, and I can only hope that he finds reason to move on soon.

The two of my four children who are old enough both applied to URI but with each, I’ve been increasingly less supportive of it as a choice.  For the next two, I’ll recommend avoiding contributing so much as an application fee to the culturally destructive and politically divisive institution.

This is regretable.  We visited the campus over the summer, and I had the expected wave of nostalgia.  If I’d known the place was about to fall into the darkness of ideological ignorance, I’d have taken more pictures.  Of course, I was already too late to view the iconic Student Union mural pictured as the featured image of this post, which had already been covered up for the cultural pogrom of aggressive over-sensitivity.

Insanity
This is why kids are going into trade schools. They are sick of indoctrination by the time they finish high school

That little-known, world-famous personality selling out the Vet is Jordan Peterson. – Anchor Rising

[…] a big story in the Ocean State, recently, that the increasingly radical University of Rhode Island revoked largely ceremonial honorary degrees previously bestowed on Rudy Giuliani and Michael Flynn, but […]

That little-known, world-famous personality selling out the Vets is Jordan Peterson. – Anchor Rising

[…] a big story in the Ocean State, recently, that the increasingly radical University of Rhode Island revoked largely ceremonial honorary degrees previously bestowed on Rudy Giuliani and Michael Flynn, but […]