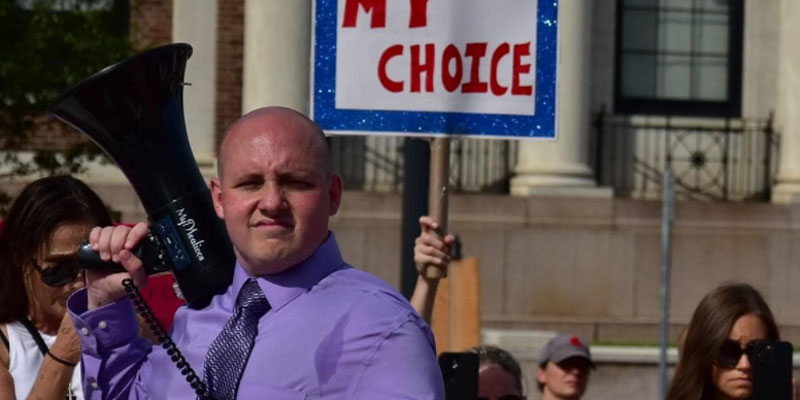 An Introduction to Independent Candidate for Governor Paul Rianna

Every week, Rhode Island journalists break news about mainstream candidates for high-profile public offices like governor and dig for clues about candidates who may not yet have announced.  It seemed strange, therefore, that we know so little about independent candidate Paul Rianna.

No speculation is needed; he’s definitely running.  He’s also proven a willingness and ability to be actively engaged and to motivate others.  As a prominent organizer involved with protests against Democrat Governor Daniel McKee’s vaccine mandate for healthcare workers — which Monique Chartier estimates drove 1,300 professionals out of their jobs during a shortage in their line of work — Rianna would be much more widely recognized were he advocating for progressive causes rather than freedom.

The governor illustrated this point when he asked Rianna about the job that he lost and had no response (probably because he wants to believe his opposition is merely astroturf, rather than grassroots).

In order to get to know Rianna a little better, Anchor Rising sent him some questions:

Anchor Rising: What did you do for work before Governor McKee’s vaccination mandate, and how long had you done it for?

Paul Rianna: I was a CNA for five years where I specialized in long-term Healthcare in Rhode Island nursing homes, and most recently I was a mental health worker at Fatima Hospital in North Providence.

AR: What are you doing now?

Rianna: I am currently unemployed due to the vaccine mandate, but keeping the Faith that one day as Rhode Island’s next Governor, I will be able to overturn the mandates and get everyone back to work.

AR: You’ve been involved with one of the larger long-term protests I’ve seen in Rhode Island. How did that come together?

Rianna: When McKee announced his heavy handed mandate against those in the Healthcare profession I decided to take action. I wanted to try to unite ALL Rhode Islanders, whether they be vaccinated or unvaccinated, under one common goal: FREEDOM.

AR: What made you decide to run for governor rather than, say, a seat in the General Assembly?

Rianna: I felt like for me to make the impact I was aiming for, I needed to aim for the top. I felt like by running for Governor, I would be able to help ALL Rhode Islanders, not just one side. I want to help return Rhode Island to what it once was, and make it as great as it can be. People need new leadership, and they need fresh ideas instead of just the same old politicians that keep following the same agenda.

AR: Do you hope to accomplish anything with your campaign other than winning the office?

Rianna: I hope to help wake people up to the fact that our state needs BIG changes. Our policies haven’t been working, we need to hold people accountable and demand them to do their jobs CORRECTLY, and most of all, we need our Government to start representing THE PEOPLE.

AR: What else in your background is relevant to the job of Governor?

I’ve done a lot of work in my community, as I am living proof as someone who was born and raised in South Providence that even through the darkest times you can still come out in the end as a winner, and accomplish anything you set your mind to.

I proved my leadership as a CNA during the height of the pandemic, I always advocated for my residents as well as my coworkers, and I spoke up against the Raimondo Administration for their mismanagement during the nursing home crisis.

I’d really like to be a voice for the voiceless, and make everyone feel like THEIR voices will be heard too…Nobody should ever feel silenced by their own Government.

Over the course of my life I’ve held many different types of jobs, which means I have REAL life experience unlike most of our elite politicians. I think Rhode Island needs someone they can relate to, someone who has experienced the struggle, and someone they will be able to rely on for transparency.