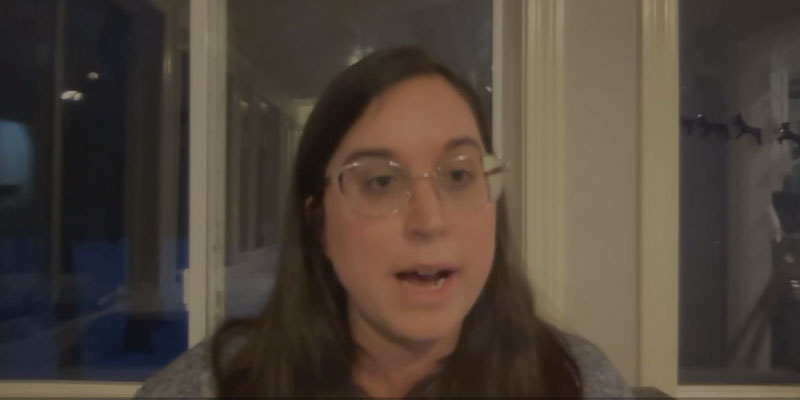 Representative Caldwell and Senator Mack are lying to their colleagues and to Rhode Island about sex ed.

About one hour and fifty-five minutes into Wednesday’s hearing of the Rhode Island House Education Committee, Democrat Representative Justine Caldwell (East and West Greenwich) jumped in with her cat from the comfort of her home to ask Democrat Senator Tiara Mack (Providence) a question about “pleasure-based sex education” legislation, of which Mack is obviously a key originator.

In essence, the door that Caldwell was trying to open for Mack was to say that this suspicious new term she wants to introduce into the state’s mandates for Rhode Island schools is really just about safe sex.  If something isn’t pleasurable, Caldwell elaborated, then that’s evidence that something’s not right or isn’t safe.

Mack refused to play along.  Yeah, yeah, we can say that’s part of it, but it’s not really what we’re talking about, here.  “Pleasure-based sex education” isn’t narrowly about safe sex, she explained.  Actually, it goes well beyond only being about sex.  It’s about a whole way of viewing life, relationships, and your body.  That is:  reality.  If this starts to seem as if Mack would like the state to establish her religion in schools, that’s exactly what she’s doing.

From the practical perspective, however, the key point to realize is that it doesn’t matter what these people say.  It matters what’s in the bill.  Mack and Caldwell’s assurances in a committee hearing have almost no relevance to how the law will be implemented.  They know this.  They’re lying in order to trick the public and give other legislators cover to pretend they thought the legislation was no big deal.

As I’ve said before, if it were no big deal, they’d change the word or take it out altogether.  They know that including specifically this phrase is the key to grooming children into their ideology, if not into sex with adults.

That isn’t Caldwell’s biggest lie, however.  The award for maximum dishonesty comes around the two hour, twenty minute, mark:

I have had kids in school for six or seven years, now, and I have never once thought I should be part of developing their curriculum at school, even though I have been an educator and have an advanced degree and have taught, umm, kids.  I am not an expert in curriculum.  Neither are many of us, and I don’t think that we should be in a place where I’m deciding what gets taught in math because I prefer this, or I decide, for example, in a timely example, that I should decide what books my kids are reading in English class.  You know, we allow experts to do that.  We don’t allow parents of any student to determine what goes on in their curriculum.

Think what you will about Caldwell’s approach to parenting, but telling the experts what they must teach is the entire purpose of this bill.  Progressives want to mandate a particular approach to sex education in the law.  If the “experts” conclude that this approach is not ideal, schools would still have to follow it.  And Caldwell doesn’t think parents should have a say, either way.

This language — which even its supporters cannot define uniformly in a hearing on the bill — injects Mack and Caldwell’s ideological, religious worldview into education, down to the age of eleven (for now).  At least for the time being, they can trust that “the experts” are on their side, but they want to write it into law to make sure their cult maintains its grip on your children even if the experts decide to return to facts, evidence, and respect for parents.

Gee, I never thought of it that way. I was just of the impression that they are assholes trying to undermine the nations families and expand government control into the most intimate areas of family life. Maybe I was wrong.

This can NEVER get into law!!! After this crap, if they got it through, what would be next?? Don’t Marxists want to put children in camps away from their parents? – This is STEP 1!!! Horror or horrors! My daughter is home schooling her son for this very reason!!!