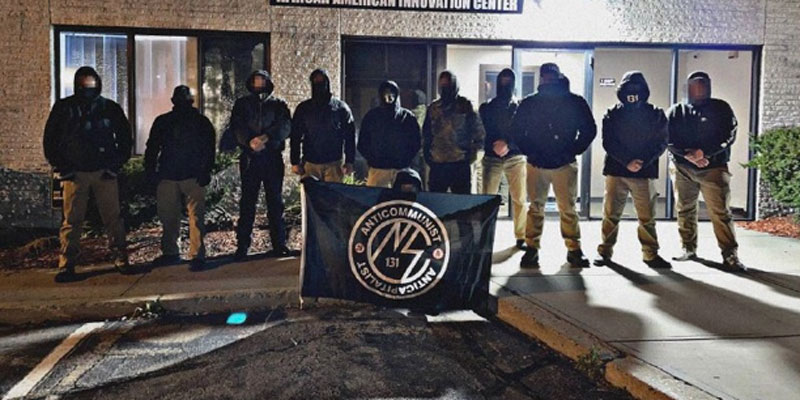 Was the Providence Nazi protest a false flag or inconsequential opponents’ feeding off each other?

Convenient, isn’t it, that a small group of people making noise and waving a Nazi flag can turn an inconsequential Communist reading by an unknown socialist organization into the hot story of the day in Rhode Island, providing massive advertisement for their little left-wing library?

For some sense of the size of the socialists’ event (about which journalists seem suspiciously incurious), consider some of the numbers.  There were “15-20 individuals… allegedly from a neo-Nazi group.”  And one of the socialists tweeted that his group was “outnumbered 5:1.”  That would put the number of people inside the library at three or four, so, basically a small group of friends reading to each other.

As a default, we should generally assume that incidents involving neo-Nazis in modern day Providence are hoaxes or false flags, but in this case, the numbers make the default less sure.  If the protest were fake, one would expect organizers to have assigned more people to actually attend the event, rather than falsely protesting it.  More likely, one small fringe group heard about the event of another small fringe group, and they joined forces for a bit of early-twentieth-century cosplay.

Where the rest of us should be concerned is with the muddying of waters as more-powerful people leverage these incidents for propaganda.  Note this statement from another activist group looking to get in on the PR boon:

The Black Lives Matter RI PAC issued a statement Tuesday about the incident: “There is no greater threat to Rhode Island than nazism and white supremacy. Yesterday evening, an organized group of Neo-Nazis that have established themselves throughout Rhode Island terrorized Red Ink Community Library in Providence Ward 3.”

The idea that the Nazi threat is significant in Rhode Island is sufficiently laughable to ignore, but the claim about “white supremacy” is where the mainstream media could actually provide a service by insisting on consistency.  “Anti-racist” literature is peppered with assertions that one finds “white supremacy” in all sorts of American institutions, most especially the institution of capitalism.  Yet, one of this group’s other cosplay flags, as shown in the featured image of this post, via John DePetro, joins anticommunism with anticapitalism.

Perhaps one can weave a tale in which capitalism is implicit white supremacy while the rare people who actually identify as white supremacists oppose capitalism, but explanation is required, to say the least.

However, one suspects that explanation is not forthcoming.  Fringe groups aren’t the only ones playing games, here, and it’s the other ones we have to keep our eye on.

False Flag was my very first thought. The images I’ve see so far show no Nazi symbols or “banging on windows” only the comments of the store owner, the mayor, governor and Rep Cicilline. If Anchor Rising can point to any actual evidence, good people want to know what really happened. I also find it difficult to believe white supremists or Nazi’s would have much to disagree vis-a-vis communism. Communism leads history in murder, slavery, racism, religious persecution and incarceration for ideological dissent. In modern times communists have expanded their portfolio to forced organ harvesting, technology theft, debt traps, human trafficking and drug smuggling. Based on the evidence, I’d be a lot more worried about the patrons of Red Ink.

Apologies, read the thread without the video. Saw it after I commented. Despite the “evidence”, this event screams False Flag as if to say white nationalism and Naziism are less akin to Communism than they actually are.