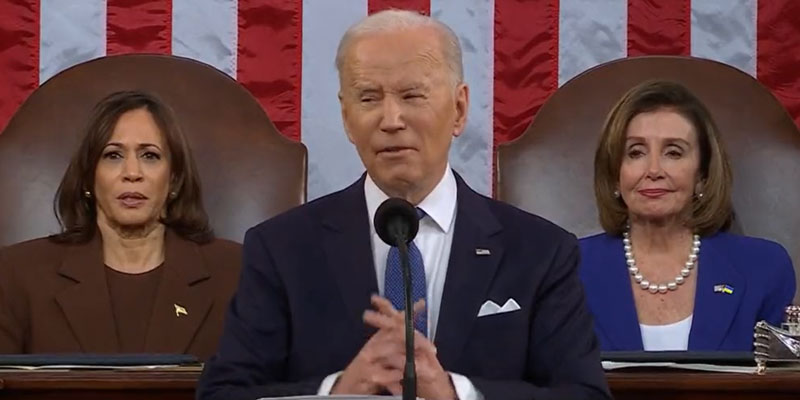 The time to admit the SOTU is performative has arrived, scary as that may be.

The State of the Union speech, as a practice, lost me long ago, during the presidency of Bill Clinton.  His practice was a seemingly endless list of special-interest handouts that couldn’t possibly be funded.  No new information emerged, and America wasn’t even receiving a useful indication of the administration’s intended direction.  The event was performative and, as entertainment, boring when it wasn’t aggravating.

Because the SOTU is performative one can see the deep bias of the American news media in the fact that Joe Biden’s obvious mental deterioration was on full display.  Whether one is following conservative commentators or mainstream news sources, scarcely a clip posted from the speech is free of language errors or marble-mouthed enunciation, as if Biden is incapable of drawing words in his head and then forming them in his mouth.  One might forgive this in a White House occupant if somehow some ordinary person rode into office on a populist wave, but this guy has been doing this sort of work for a half century.  He was never particularly bright or articulate, but what we’re seeing is a reduction of his limited capacity.

And nobody’s talking about it.  Deliberately or not, Democrat House Speaker Nancy Pelosi did her best to draw attention to herself through downright bizarre behavior and imbalance, but that isn’t the preferred distraction.  Rather, the preferred distraction is the moment two conservative Republican Congresswomen shouted out about the 13 servicemembers who died in Biden’s disastrous Afghanistan retreat, and whom he did not mention.

I’m sympathetic to the value of decorum, although I’d insist that it cannot be one way, which it has long been.  The most obvious example is Pelosi ripping up President Donald Trump’s speech for the cameras during one of his SOTUs.

I’ve made that point too mildly, however.  The reason Representatives Lauren Boebert and Marjorie Taylor Greene are in office — and the reason Donald Trump was — is that large numbers of Americans are simply fed up with politicians’ nicely stabbing them in the backs and undermining their country.  In essence, this new group of representatives were sent there to shout out during the SOTU and thereby actually to be representative.

We shouldn’t have such behavior during official speeches, but the solution is not to take the opportunity to solidify everybody in their prior stances — to affirm some in their feelings of superiority and others in their understanding that they have to become more brash in order to be heard.  Instead, we should look at the reason our country is where it is and address those causes.

For that project, no better avatar can be found for the problem than the mumbling, dishonest, incompetent, and corrupt husk of a man at the podium.