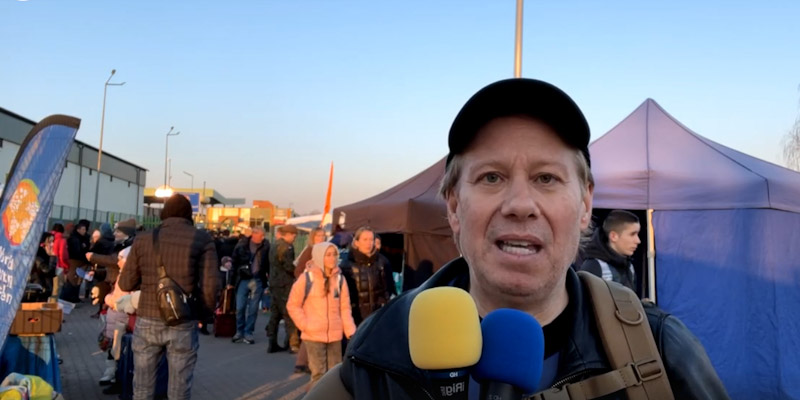 Just as he was out and about regularly reporting on Antifa/BLM protests in the Providence area, just as he was covering large protests against Governor Dan McKee’s vaccine mandate for health care worker, John DePetro has travelled to Poland and the Ukraine border to provide live, on-the-scene reportage.

So many young children from Ukraine being swept up by their parents and carried through a busy train station in Poland after traveling days on packed trains to leave their bombed out neighborhoods. Our first week has been both eye opening and heartbreaking to watch as Putin decided to bomb Ukraine and destroy the lives of millions of people while destroying the peace we enjoyed. The people I have met and interviewed are hard working people who love their country and their President. One might think people would have harsh words for their leader after their country had been attacked but the only words of hate are directed at Putin. It is disgraceful the way some Americans blindly follow the propaganda of Russia and China and root for their own country to fail while sharing misinformation to aid the enemy. Worse, conservative hosts are being shown on Russian state-TV praising Putin and bashing Biden. Troubling to see so many people confused as to what news is real and which news is foreign propaganda.

That last sentence strikes home in a not-quite-ironic way.  Imagine for a moment that it was just about any other media personality from Rhode Island who had traveled around the world to provide this sort of coverage, whether somebody from the mainstream journalist clique or one of the progressive journalists who are so well received by the mainstream.  The journalists of the Ocean State would be having him or her on as a recurring guest.  They’d be applauding.  They’d be encouraging funding.

But if you don’t listen to DePetro’s radio show or read Anchor Rising, you’d have no idea that anybody from the Rhode Island news universe is over there.

The blacklist is real.  For most of the people who claim to keep you informed, who brings you news is at least as important as whether you receive it.

No doubt,  many of those mainstreamers would nod along while (accidentally) reading DePetro’s complaint about Americans’ falling for foreign propaganda.  What we really need, however, is for them to realize that they’re producing domestic propaganda that is of an identical character.

on the “seen” reporting? He musta seen it ovah theyah

Thank you for pointing out the typo. Been a crazy couple weeks! I should know never to skip the final read-through.

Don’t you think what John’s doing deserves a bit more attention, though?