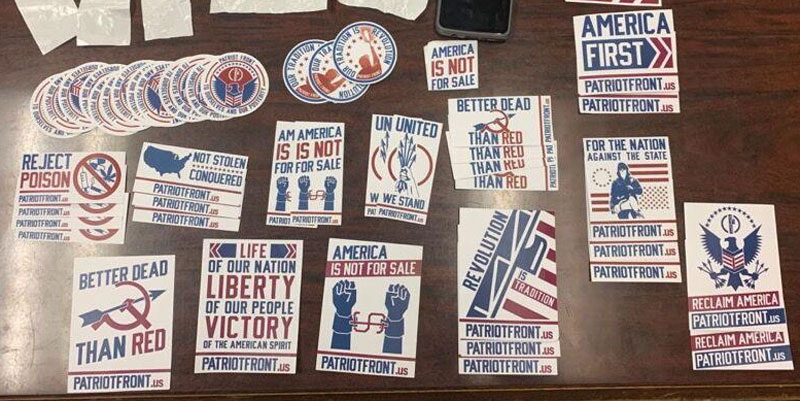 According to Jack Perry’s uncritical recitation of the Anti-Defamation League of New England’s warning about an increase in “white supremacist propaganda,” Rhode Island is seeing a dangerous increase.  By their own standards, though, the ADL and the Providence Journal are contributing to the threat.  Consider the last line of the article:

“By using propaganda to spread hate, a small number of people can have an outsized impact, giving the appearance of larger numbers and affecting entire communities,” the report says.

Exactly.  Post a few stickers around, and the ADL and Projo will tell people far and wide that you’re growing in popularity.

What precisely are we talking about, here?

About 70 of the Rhode Island incidents involved the Patriot Front distributing fliers with messages such as, “America First,” “For the nation, against the state,” “Not stolen, conquered” and “Reject poison,” according to the ADL.

All but eight of the “incidents” were fliers (aka free speech) with some variation of these stickers.  The puzzling part, to me, is why the ADL and Perry would include the “reject poison” tagline as an example of white supremacist propaganda.  Of itself, it is only a message not to do drugs.  Is that “white supremacy”?

The inclusion of a pro-health message is illustrative of the dangerously muddled thinking of progressive activists.  Anybody who actually reads the article (rather than merely reacting mindlessly, as is probably intended) will be confused.  Rejecting poison is a good idea.  “For the nation, against the state” could be the motto of patriotic libertarians.  Many people take “America First” to be a statement wholly in opposition to handing our sovereignty over to a global cabal.  Of the provided examples, only “Not stolen, conquered” is objectionable on its face.

American progressives are in a strange place, indicative of the fundamental dishonesty of their own rhetoric.  They promote the notion of a growing white supremacist threat that requires good people to be on edge and willing to compromise their civil rights like free speech and donate money to progressive causes, so they have incentive to join in the effort of promoting the propagandists.  Implicit in their warning is the assumption that white people, writ large, have an innate hatred and bigotry that can easily be drawn out with goofy images deployed by strange people.

Putting aside that insulting (and racist) assumption, if progressives really believe it, they should consider the danger of their attempts to bring attention to themselves by bringing attention to it.  I suspect, however, that they don’t believe it but rather are sowing division and fear for self-interested reasons.