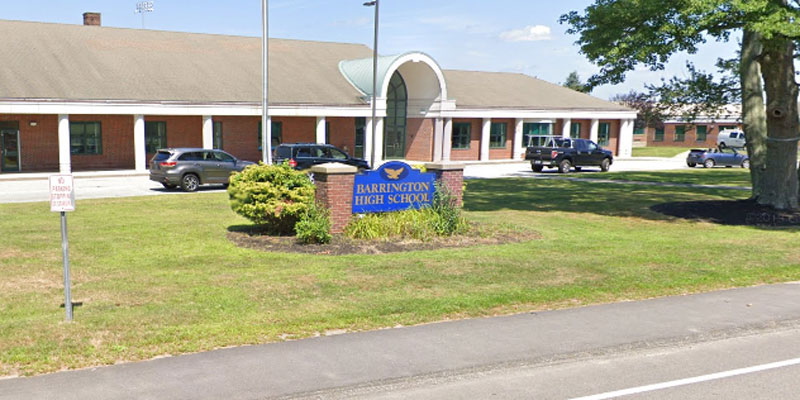 Yay! Barrington has introduced a new acronym to the scam of destroying education.

We hear that “parents [in Barrington] are really upset,” but they’re not nearly upset enough.  If they were, the news reports wouldn’t be simply about polite expressions of discontent with the school department’s edging out honors programs, but about members of the community shouting and making threats of political repercussions.  School officials have likely set one of the best districts in the state (which, granted, is not saying much) on a course for destruction; at best, they’re conducting a risky experiment with it.  Either way, their materials feel like a scam.

Take, as a starting point, the sloppy Q&A of the district’s “high school program of studies restructuring”:

As noted earlier, students in these courses will have the opportunity to engage in passion and interest-based learning that will set them apart from their peers with whom they are competing for college and career opportunities. Students will pitch a proposal for their project at the start of the course, they will outline touchpoints and expectations, and teachers will approve or request refinement to the proposal. Students will be provided expectations and teachers will be available for support and guidance. Work will occur during adn beyond the school day, as is consistent with honor’s level courses. Teacher will review the final project at the end of the course according to the expectations set and will determine if honor’s designation has been achieved. With the option of earning honors-level distinction open to all, more students will have the opportunity to pursue their individual interests and passion.

Typos understandably find their way into all documents, but this is an important product for the district, as indicated by the long list of references appended to give it heft, and its authors didn’t care enough to catch a sequence of errors, including “adn,” “honors” as a possessive, and “teacher” without an article or plurality.  This superficial sloppiness could be ignored if it weren’t so clearly evidence of the strategic intention to slip the important questions past the reader.

Ideological texts often utilize this approach.  They make the assertions of the sales pitch (“passion and interest-based learning… will set them apart from their peers”) without explaining how the new system will functionally work better than the methods it is replacing.  For that, the reader must dig into the sources, which swing wildly from lengthy reports to brief video arguments that don’t explain the change so much as they push politically motivated pressure campaigns that rely on deceptive and inflammatory rhetorical tricks (“how can you possibly defend that apartheid in our schools”).

In the local case, the Barrington school district — not some Australian academic — is imposing this change on its students.  It is up to the district to explain in detail how this will work.  Instead, we get expressions of intent, in the WPRI article at the first link above, by a consultant, Kate Novak:

“The intent is not to provide all students with a single curriculum, but rather a learning environment that meets their needs for challenge and support,” she wrote.

What does that even mean?

One suspects, however, that Barrington’s lack of rigor and obviously ignored questions follows through to the entire movement, almost certainly to a base of research that is equally sloppy and with a tendency to ignore complicating results and extrapolate isolated findings as if they have universal applicability.

For illustration, follow a link that WPRI’s Kim Kalunian provides.  Here, you will learn (if that word really applies) about a scary new nice-sounding acronym:  Universal Design for Learning (UDL).  Again, the key questions that ought to be answered right up front are ignored or buried.  Introductory videos that look more like advertisements or promotions for a political campaign make the claim that putting all children into a single classroom and requiring teachers to accommodate a room full of different learning styles all at once will produce miraculous outcomes.  Again, they never answer the obvious questions that anybody with experience of traditional education would ask:

The answer, one begins to sense, is that the academics and administrators bringing these changes don’t really know.  They want to try something new — for whatever reason — and thanks to copious funding from governments and meddling billionaires, they have the power to force it on your children.

Well i guess there is no need to wory about this. If Varington can do do this that any schoo district can

As goes the state, so goes the State House. – Anchor Rising

[…] obvious symptoms.  The Convention Center gorging on employee bonuses is another.  Put Providence, Barrington, Portsmouth, and other communities that are busily destroying the education systems on the list.  […]