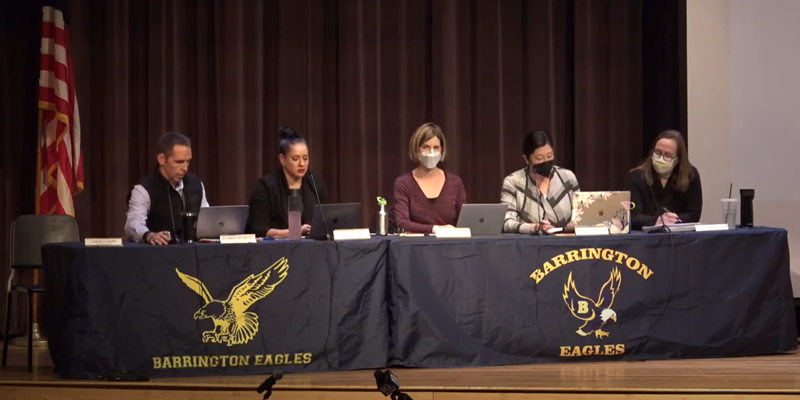 Will growing parent dissatisfaction make a difference in Barrington?

Barrington resident William Jacobson has an update on his Legal Insurrection site about the growing pushback of parents against the school department’s decision to reduce academic opportunities for advanced students.  The content is somewhat encouraging.  Jacobson notes the national attention the story is attracting, provides video from a school committee meeting that shows more than the handful of parents who were engaged just a couple months ago, and notes that 500 residents have signed a letter against the move to “de-level” the schools.

The underlying issue is neatly summed up in these two paragraphs from a Fox News article quoting Jacobson:

Bill Jacobson, a long-time Barrington resident and founder of Legal Insurrection, said, “De-leveling is part of an agenda of equalizing outcomes. This equal-results approach stems from critical race theory and diversity, equity and inclusion, which posit that unequal outcomes are the result of systemic bias and discrimination. ‘Equity’ in particular is the codeword for bringing high achievers down to equalize outcomes,” Jacobson said. “‘Equity’ has become an unhealthy obsession, and parents are seeing the impact.”

Actions such as the school department is taking are a perfect illustration of the progressive habit of derailing institutions from the purpose for which they were formed in order to make them ideological machines.  With progressives in control, a school is not primarily to educate, a business is not primarily to produce goods and services, and a government is not primarily to mediate inevitable differences in citizens’ interests.  All institutions are retooled to push woke progressivism.  Everything becomes political, which is also why people have begun to lose their careers over political donations and non-work-related statements on private social media accounts.

In the long run, this will destroy our civilization, but as Barrington is already learning, it doesn’t take the long run for progressivism to destroy an institution.

As much as we might want to be encouraging of the opposition in Barrington, optimism is difficult to muster.  Even evidence that the woke distraction is negatively affecting education in the school district will not matter.  Direct testimony from parents about the worrying experiences of their children will not matter.  The defining objective of the progressives in town government is to advance their fashionable ideology, not to serve children or the community.  Those things are relevant only to the extent that letting things slide will cost them the power to continue pushing their agenda.

All the eloquent and impassioned appeals of well-educated Barrington parents is useless, because the people in power are not amenable to persuasion.  Public feedback is something they permit in order to let pressure out of the system, not a civic exercise to understand the desires of the community.

At the very core of the progressive ideology is the belief that the only reasons people oppose them are bigotry and greed, so opposition is simply invalid, and their purpose is to defeat, not to resolve conflict for the good of the community.  They’re on a religious crusade, and they will push as far as they can until they are replaced in office.  Then, they’ll moderate their rhetoric and vilify their opposition, suddenly caring about children and the broader community again until they are back in power.