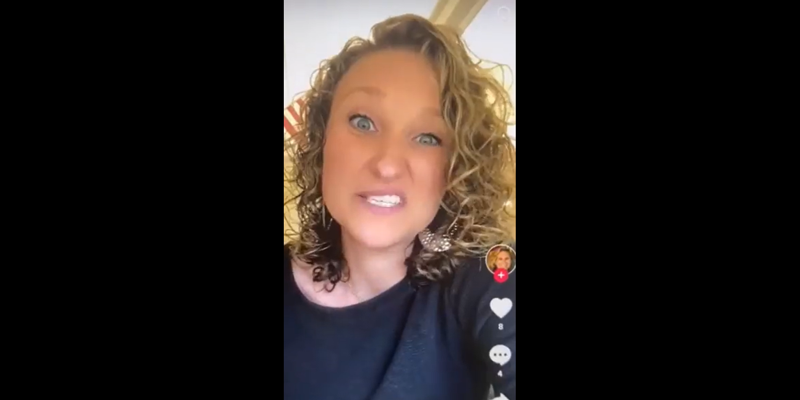 The attitude that Westerly middle school English teacher Erica DeVoe displays toward parents in this TikTok video, which is also targeted toward her students, is disturbing:

One can gather from her commentary that she’s had a practice of making TikTok videos with her students, but that a change in policy after complaints from parents has prevented her doing so any longer.  The portion of the message directed at parents is like an adolescent thumbing of the nose at people whose authority she rejects.  That a teacher would take this tone in a video made to be viewed by students is completely inappropriate, and a healthy education system would, at the least, put Ms. DeVoe under probationary watch for a while.  She is actively modeling the behavior of disrespecting their parents based on a different opinion on the TikTok practice in the classroom, which parents are entirely within their rights to assert.

While teaching students to use technology for communicating, making videos, and such things is certainly within bounds, bringing mass-communication platforms like social media into the classroom arguably crosses the line.  It isn’t at all clear that having teachers endorse the use of TikTok, going so far as to draw students into it, has much benefit, and it certainly comes with risks.  To be sure, many (maybe most) of the students may already be active on the platform, but it makes a difference when a teacher incorporates it in this way, not the least because it expands her own relationship with the students beyond the academic setting.  That may be fine in individual circumstances, but as a general matter, some distance should be maintained.

DeVoe’s message, itself, reinforces this suggestion.  Apart from the fact that she leverages this connection to communicate with students disrespectfully about their parents, she defends her practice not on pedagogical grounds — that the TikTok videos further some academic goal.  Such a defense would keep her firmly in her place as a professional hired to teach children subject matter and open the door for comparative analyses of the multiple ways she can accomplish the goals that she (presumably) shares with the children’s families.  Rather, she defends the practice on the grounds that it is fun and that she likes how it puts her on an even relationship plane with the kids in the hallway.

We shouldn’t ignore the reality that this is classic groomer posturing:  the authorities in your life are preventing us from having fun together.  Implying anything more aggressive than what’s already on display would go too far, although another video with a rap and dance move making reference to drinking wine shows how easily lines can blur with such activities.  However, the fact that DeVoe’s posture is similar to that of people with far worse intent ought to be a sign of its inappropriateness.

My child had this teacher last year. They regularly made TikTok videos. There is no way she can claim that it’s tied to academics because making the TikTok videos were optional. So while she’s in class making TikTok videos with some children, other children are not participating in it. My child was one of those one because we have told her repeatedly she should not be on TikTok and two she thought the whole thing was “stupid”. In regards to Ms. Devoe’s. TikTok video where she is pretending to drink wine that appears to have been made during her planning period. The planning period is it negotiated block of time within the school day where teachers do not have teaching duties but are supposed to be preparing for their lessons. Has a taxpayer and a parent. This behavior is completely out of line. I’ll go further to say that the cell phone policy she is referring to had to be instituted because of the behavior of the students at the middle school. The middle school student behavior currently a subject of concern for the district and they have had to make multiple adjustments to student expectations. As a result. The fact that this woman made this video shouldn’t rage the administration, the school committee, the parents, and the taxpayers. And I’ll finish up by also pointing out that this teacher is at the center of the book controversy in Westerly. She was providing her 7th graders 11 and 12-year-olds with books that graphically portray suicidal and other inappropriate behaviors.

I miss my teacher she did nothing wrong

Bro doesn’t know anything she wouldn’t follow us back so she’s not “pals” with us. That phone policy was not created because parents told the school it was and I quote “you guys as students are inappropriate on your phones in a place of learning in the school” so you got that wrong if your gonna do something don’t shoot shoots at the teacher maybe help the students who are left with a substitute in there English class for the rest of the year you bum.

My child was a student here last year and got constantly bullied by Mrs. DeVoe. Saying she was obnoxious, Stupid, she also said, “This kid must have a serious lack of brain cells, because she just can’t keep up with my lessons”. I think she deserved to be fired. Good Riddance