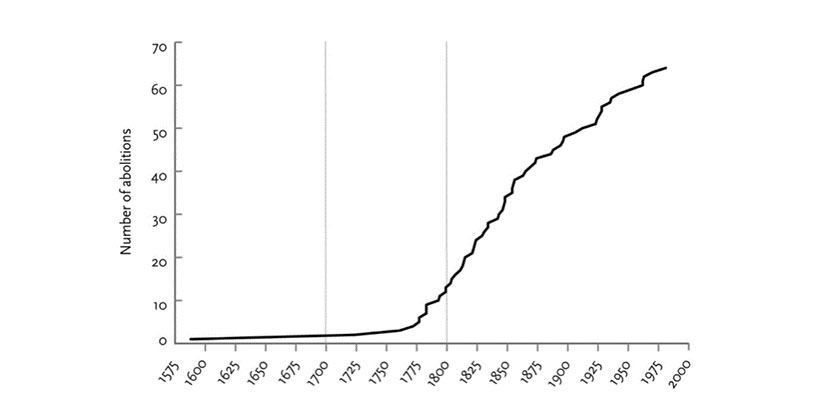 It’s time for the U.S.A. to transcend Enlightenment propaganda.

Independence Day was the perfect day for me to listen to Jordan Peterson’s conversation with Iain McGilchrist on the former’s podcast as I mowed the lawn, because it completed a few more pieces of the puzzle I’ve been working out recently.  I’ll surely write much more about it in the future, but the relevant proposition for this post is that many of the problems we currently face derive from an unjustified presumption of the Enlightenment that has been spread as a false mythology through our education system and other cultural institutions.

I should emphasize that I’m urging a refinement rather than a replacement; I’m a fan of the Enlightenment, not the least because I believe the United States of America to be its crowning achievement.  Consider the chart used as the featured image of this post, which Daniel Roman borrowed from a Stephen Pinker book for a post “shattering” the premises of critical race theory (CRT).  Something happened around 1776 that sparked an explosion of governments’ abolishing slavery.  What could that have been?

Hannah Cox provides an explanation in a post on her own site:

… I merely want to point out that before the US, poverty, inequality, indentured servitude, slavery, racism—all of these evils and more were the status quo, and no one really expected differently.

When we said, “We hold these truths to be self-evident, that all men are created equal,” the reality is that this principle had been self-evident to practically no one throughout thousands of years of history. When we said that all men are “endowed by their Creator with certain unalienable Rights,” it got people’s attention, and suddenly others began to agree. When we said humans are entitled to “Life, Liberty and the pursuit of Happiness,” it became a violation to impede such things. But make no mistake. These notions were not mainstream when our founders threw down the gauntlet with the Declaration of Independence.

This isn’t precisely true.  The idea that human beings have a fundamental equality was not at all new at the founding of our country.  Indeed, one can imagine a chart similar to Pinker’s that shows the spread of the notion of fundamental human equality with an inflexion point in the first half of the first century Anno Domini.  However, just as the Declaration of Independence didn’t cause the instant abolition of slavery the world ’round, it has been taking thousands of years to work out that inflexion’s significance.

The Enlightenment wasn’t a break from this tradition, but fully part of it.  What distinguishes the Enlightenment, following the Reformation’s lead, is the principle that we don’t have to strive to work together.  We’ve been working out that inflexion for a few centuries, now, and the results are proving disastrous.

The United States changed the world by applying the understanding of equality under God to equality under the law, including the laws pertaining to how we govern.  The Declaration made the argument that we have a right to break away from governments inimical to our fundamental equality, which ushered in a revolution in accountability.  We must remember, however, that the assertion isn’t just my equality with you, but also your equality with me, and that imposes a mutual responsibility.

CRT is notable, in part, for its rejection of equality under the law as a satisfactory framework within which to work together.  We in the United States can produce a healthier inflexion point in history by reinforcing the truth that equality is a cooperative endeavor over time, not an invitation to break apart from, much less subjugate, anybody (alive or dead) with whom — or any traditions with which — we’d prefer not to associate.

Again, incorrect. The idea of equality before the law most certainly did NOT arise with the Reformation. Examine closely this statement from Alexander Hamilton (1774), “All men have one common original, they participate in one common nature, and consequently have one common right.” The idea that all men share a common origin that participates in a common human nature originates with Catholic philosophy, which in turn relies on the Aristotelian idea of “forms” The idea of common human nature, i.e., eternal forms, is specifically rejected by Hinduism and Buddhism. Hinduism is noted for its caste system, but Buddhism, while rejecting forms, insists on the common equality of all men. But Buddhist equality stems not from a common Creator (Buddhists do not believe in a personal god) or common humanity. Instead it is based in the idea that everyone labors under the same delusion, the delusion that individuals exist. Everyone labors under the delusion that reality exists, and all therefore suffer. The Western idea that everyone shares a common origin in God and a common nature is the source of the idea that everyone shares common rights. Our rights flow from God, not from man or nature. Thus, Western civilization and rule of law is grounded in monotheism. Judaism holds that Jews are a model to other nations, Jews have special rights and responsibilities due precisely to being Chosen. Judaism is decidedly NOT evangelistic. Christians, on the other hand, are rabidly evangelistic. EVERYONE is meant to live as brothers under the law of God, which is itself mirrored in the laws of nature and the laws of man. This concept of interrelated law was a constant in the history of Catholic thought, but most clearly elucidated in Aquinas’ Treatise on Law. Since Aquinas’ work was held as a touch-stone of clarity,… Read more »

I’m not sure what you’re saying is incorrect; perhaps I was being too brief to be clear.

What I am saying the Enlightenment took from the Reformation was not the principle of equality under the law, but rather the principle that we don’t have to work together — that the individual can go off on his or her own without regard to everybody else.

I think we agree. I’m suggesting that Christianity made manifest the idea that we are fundamentally equal, which can be rephrased as saying that we all matter to God. Over centuries, the West strove to figure out how to apply this revelation. Martin Luther was part of this trend, except that he added an element of rejecting the shared project. This rejection carried into the Enlightenment and is a key shift in history that needs to be healed.