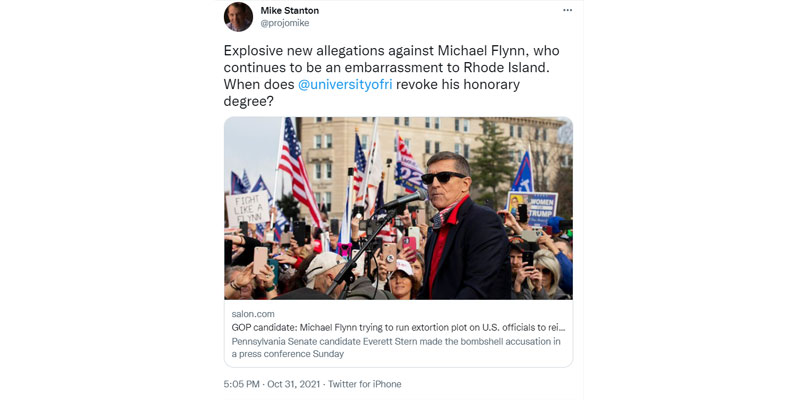 Is Stanton a journalism professor or a town gossip?

Mike Stanton is a former Providence Journal reporter who now teaches journalism at the University of Connecticut.  He’s also something of a case study in how Twitter has exposed the ideological nature and lack of objective intellectual rigor in journalism these days.

This time, the evidence he provides for this proposition has to do with one of Rhode Island’s more-famous residents:

Explosive new allegations against Michael Flynn, who continues to be an embarrassment to Rhode Island. When does ⁦@universityofri⁩ revoke his honorary degree?

Somehow it still surprises me that a journalism professor would demand concrete consequences in response to “explosive allegations.”  When I expressed that opinion to Stanton, he replied:

The body of his work before these allegations seems sufficient, and URI has already weighed it. He was also on tape the other day comparing Dr. Fauci to Dr. Mengele.

Note how, in Stanton’s mind, insulting Anthony Fauci (probably related to the now-infamous puppy experiments) belongs with accusations of corruption as reasons for a public university to seek to embarrass somebody by revoking an honorary degree.  When I suggested to Stanton that he’s putting his political opinion above principles of evidence and skepticism, he responded as follows and ceased conversing:

Spare me your faux outrage. What doesn’t outrage you reveals your true principles.

I asked him to show me where he expressed outrage about evidence that Hunter Biden has made money selling access to his father, and he did not respond.  More broadly, readers should note that Stanton was the one in the outraged position.  I was offering a critique of his “faux outrage.”

Stanton started out by promoting what he himself termed as “explosive allegations” as if allegations are sufficient to justify a call for action from a public institution of higher education, and he ended up asserting that anybody who doesn’t share his condemnatory approach — which, I contend, should be the position of every journalist — is himself or herself morally questionable.

That is the attitude of a town gossip, not a journalism professor at a major university.  Unfortunately, the weight of the evidence seems increasingly to suggest that Stanton is nothing if not representative of his profession.