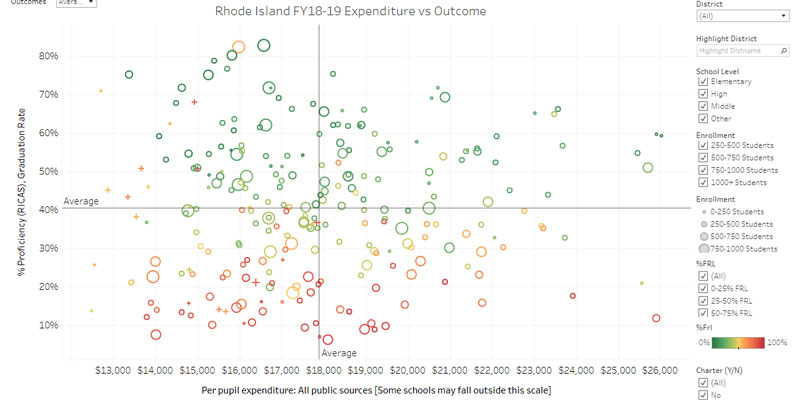 They’re scamming us when they talk about money in education.

On the periodic occasions that one sees headlines in Rhode Island about improving education, the focus is almost invariably money, whether the topic is an adjustment to the state funding formula or about a “right to an education,” by which advocates ultimately mean a right to more tax dollars.

But take a look at the featured image of this post, which I came across on Georgetown University’s Edunomics Lab.  Each mark is a school, and the higher up they are on the chart, the better students do with standardized math and English scores and graduation rates.  The farther right they are, the more they spend per student.  The greener the mark, the wealthier the average student, and the redder, the poorer.  Plus marks are charter schools.

If school spending made a difference, the marks would generally move from the bottom left of the chart to the upper right… but they don’t.  There appears to be no correlation at all between spending per student and student success, even if we look only at the poorest districts, where presumably funding would make the biggest difference. 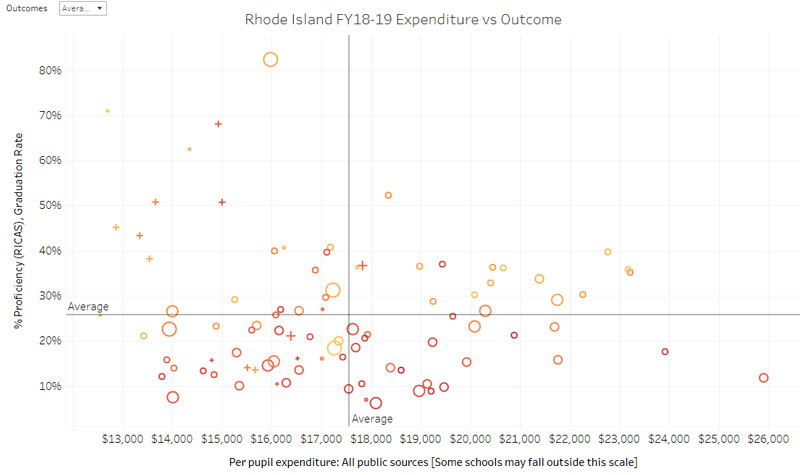 Across the country the story is the same.  If anything, the correlation appears to be inverse.  Schools seem to do worse when they get more funding.  As much as I’d like tax cuts, though, that story isn’t quite complete.  From a relatively cursory look at these charts, one suspects that the reason for this inverse relationship is that wealthier communities do better and spend less per student, while spending more per student makes no difference in poorer communities.  Thus, there are simply fewer high-spending, high-success districts because spending doesn’t matter and districts in which students do well have less leverage to trick taxpayers into giving them more money.

Two factors obviously do matter, however.  The first, as just indicated, is the wealth of the community.  Unfortunately, however, simply transferring money to poorer people probably won’t make a difference.  If raw money were the answer, one would expect school spending to make some difference.  Rather, wealth is probably more important as an indicator of social and cultural factors.

This hypothesis holds up in light of the second relevant factor.  Look at the Rhode Island chart a couple paragraphs up, which shows all RI districts in which at least half of the students are eligible for free or reduced lunch.  Those plusses in the upper left, with low spending and high results, are charter schools attended by poorer children.  Two possibilities come immediately to mind.  Either there’s something about regular district schools that impedes student achievement, or poorer families with the same social and cultural attributes that help wealthier communities self-select into these schools.

If we were truly serious about improving education, especially for disadvantaged students, we’d focus on these possibilities.  Rhode Island won’t do so, however, because a significant number of vocal people don’t like the ideological implications.  Perhaps more significantly, our state is run for the benefit of special interests for whom collecting taxpayer money is the primary purpose of government schools, and that’s an area in which they excel.

I think the first, and foremost factor, is parental involvement and expectations.