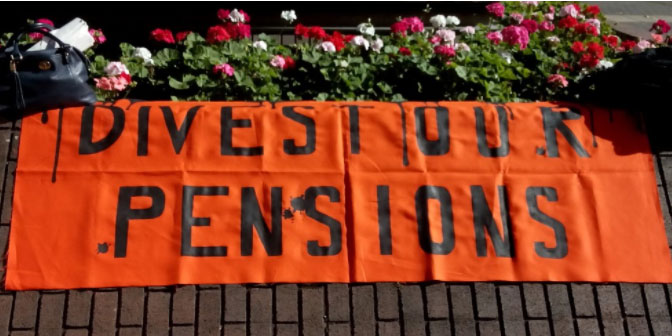 Is the General Treasurer divested of fiduciary responsibility?

I ask because in a new press release from Rhode Island’s General Treasurer Seth Magaziner, the progressive Democrat announces his office’s step to divest the state pension fund of investments in fossil fuels:

This morning, in advance of Earth Day, Rhode Island General Treasurer Seth Magaziner announced a nearly 50 percent decrease in the Rhode Island pension fund’s exposure to companies that engage in the production and distribution of fossil fuels by this summer. The Treasurer made the announcement at Save the Bay in Providence, and was joined by Save the Bay Executive Director Jonathan Stone and Environment Council of Rhode Island President Priscilla De La Cruz.

That’s a strange use of the word, “exposure.”  Typically, when one is thinking mainly in terms of the responsibility to guide the finances of an investor, the word is used in the sense of exposure to financial risk.  In Magaziner’s press release, it seems more like a spin-word to make it seem as if the divestiture is a necessary financial move.

Maybe the pension fund’s portfolio shouldn’t have fossil fuel investments and maybe it should, but one would expect somebody with fiduciary responsibility to explain why in terms of dollar-for-dollar returns, not political/environmental objectives.  Backing up the treasurer in the press release, Ms. De La Cruz insists, “There is big economic opportunity in continuing to disinvest in fossil fuels and reinvest in clean energy.”

According to her LinkedIn page, Ms. De La Cruz’s bachelor’s degree from Rhode Island College was in business marketing, and she holds a master of liberal arts in management from the Harvard Extension School.  Her limited work experience suggests her occupation as managing activist organizations.  Those are all fine credentials, but it’s telling that hers is the supporting voice in a press release about the investments of the state’s $9 billion retirement fund.