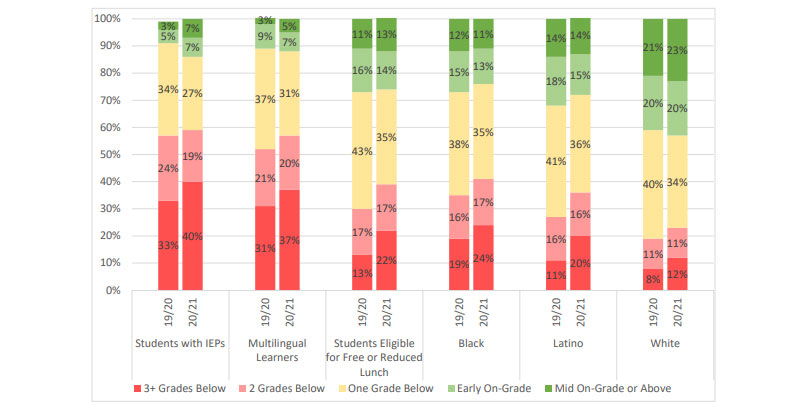 The Tragedy of RIDE’s LEAP Report

One’s first impression upon reading a relatively long press release from the Rhode Island Department of Education (RIDE) is that it’s an archetype of the genre, making the subject matter sound momentous while saying almost nothing of substance.  Its purpose is to announce the publication of a final report from the Learning, Equity, & Accelerated Pathways (LEAP) Task Force, which report reads like an even-more extensive entry into the same grandiloquent, yet banal, genre.

By the time the reader turns to a page showing RIDE’s “action steps,” however, a more frightening impression has begun to dawn:  The authors of these documents really think they’re saying something!  They think it was an accomplishment for a few dozen people to gather, discuss, and write down these “priorities”:

They think it meaningful that RIDE has “committed to” a list of generic tasks that one imagines cognizant Rhode Islanders already expected, with the exception of the last, which we’ll address in a moment:

Inasmuch as most of the report could have been written by any of the task force’s participants (or any intelligent observer of the current intellectual fashions among academics and bureaucrats) before the first meeting, a question arises:  Just what do they think they accomplished?

The answer may sound sarcastic, but it isn’t as straightforward as it appears in its obviousness.  Their accomplishment was to write a report with the names of several dozen “stakeholders” on it that regurgitated the de rigueur ideology.  No surprises.  No challenges to any established insiders.  And now RIDE can move forward armed with a long, seldom-to-be-read paper authority when demanding more money and a more-progressive pedagogy.  It provides cover.

Most notably, it provides cover for the overt racism that progressives are promoting under the brand name of “equity.”  As Larry Warner of United Way of Rhode Island says in a highlight on page 28 of the report, “This is an opportunity to think about system transformation and call out racism and structural barriers.  We need to think about a strategic approach and exercising all of the levers to change.”  Text on the next page talks about elevating disadvantaged students “through an explicitly anti-racist, equity-focused lens.”  Anti-racism is just racism that progressives like.

This is why the last of the RIDE “commitments” on the list above is different from the rest.  The “racial equity decision-making tool” is likely to be a concrete regulation that tells state bureaucrats and local administrators how they must make decisions along the racist anti-racist line.  That’s how the “levers” will be pulled.

Culturally, this is a horrifying step in the wrong direction, but for Rhode Island’s school children, it’s also a tragic missed opportunity.  Turn to charts showing students’ performance versus grade-level expectations, with this year compared to last year for math and reading (pages 26 and 45, respectively). 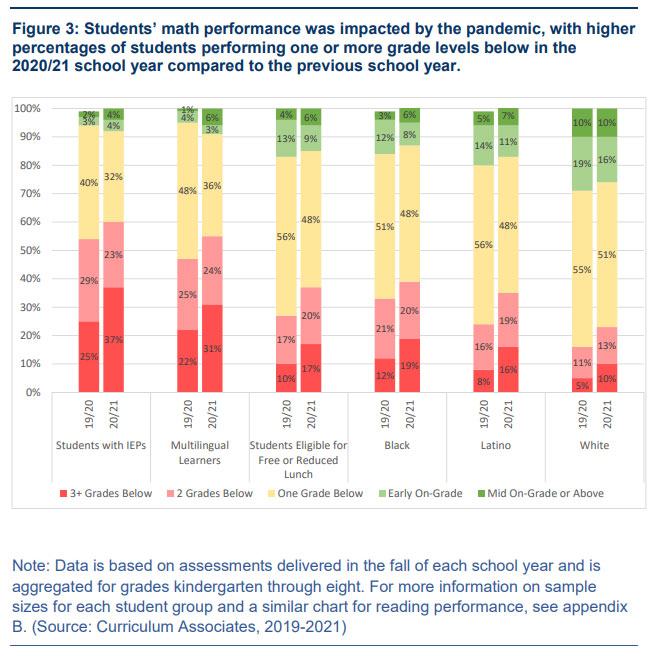 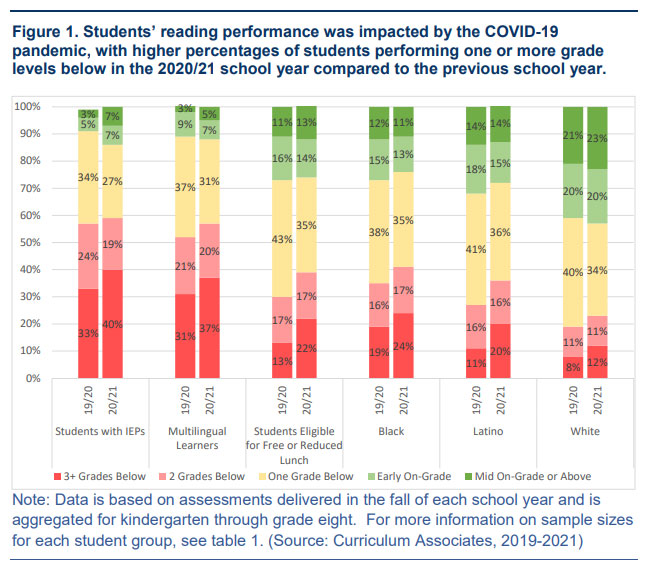 Notice something curious:  The second chart, which was the only one in the report’s “Appendix B. Supplemental Data Analysis” section (and which has no actual analysis, other than the chart) is labeled, “Figure 1,” even though it’s at the very end — almost as if the authors are hiding it.  Why would they do that?

Perhaps because it points to an area of inquiry by which the task force might have come to some unexpected and truly helpful conclusions.

In math, IEP and multilingual students who are on grade level actually went up — six times for multilingual students at the highest level of achievement.  But the numbers are relatively small, so a casual reader might gloss over it as an aberration.  On the reading chart, however, the numbers are a bit bigger, so the green bars are more likely to register in the mind, and the trend is visible for white students, too, so the parents of the majority if students might see it in terms of their own families and think about the implications.

In short, the general lesson of these charts is that students in all groups who were trailing by one grade level divided.  Some caught up, and others fell more behind.  What variable might distinguish between these trends?  Well, judging by the unexpected increase at the top for the IEP and multilingual groups in both math and reading, an obvious hypothesis is that the explanation is parental involvement.  Parents who felt they had to help their children did a better job than the teachers had been doing in the absence of that involvement.  (Obviously, the best result is probably both, not either/or.)

The LEAP Task Force might be inclined to disguise this finding for a few reasons.  First, some advocates might say it makes the case for homeschooling, or at least for increased criticism of public schooling.  That would bring the report to an unexpected conclusion that serves neither the insiders nor the progressive ideologues.  It’s also not a problem that needs equity and race to be part of every decision.  The “decision-making tool” that such a finding would call for wouldn’t be about “equity,” but about how the system can measure parental involvement, identify where it can be improved and why it might lack, and either increase it or fill the gaps.  This, in turn, could lead to uncomfortable, forbidden questions if further analysis uncovered racial differences.

The tragedy is that this is an area where the unique experience of COVID shut-downs could become nearly a blessing in disguise by reorienting schools away from special interests and ideology and toward providing students with what they actually need.  In other words, it could identify the levers that our children truly need pulled, but not the ones the sorts of people who participate in Rhode Island task forces want to see touched.