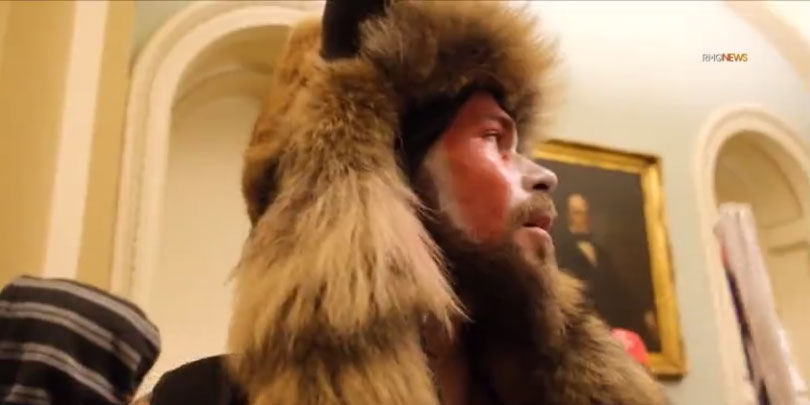 So much has been made of this batch of Capitol “stormers” that new footage deserves attention.

It’s actually quite peculiar.  On and shortly after January 6, one was apt to see comments on social media and elsewhere from mainstreamers promoting the motley crew who, at least, had the best insurrection costumes.  I even remember hyperventilation about how the buffalo guy had left a threatening note for the vice president.  But it was always a choice between believing your eyes and believing the talk.  That particular group looked hardly threatening at all — more like a field trip to Washington for some protest performance.

Now ZeroHedge has video of the moment the Capitol police were about to let the group into the Senate chambers, and the theme from the protesters is “this has to be peaceful.”

Sharing the video on Instapundit, Sarah Hoyt makes an important comparison to the actual left-wing riots of 2020.

In a recent episode of her podcast, Megyn Kelly insisted that the people who prompted the January 6 protest “lied to” the crowds that the election outcome could be changed.  That assertion ignores the context, which was a year in which protests were declared “mostly peaceful” when only millions of dollars in damage were done and only a little bit of person-to-person violence occurred and in which the rules of an election were simply discarded.

Although there may have been some people who actually thought that President Trump could have been handed a second term on that day, the more-pervasive sense among his supporters nationwide was that they could at least secure a fair review of all that was suspicious about the election.  And one can have little doubt that the protesters who entered the Capitol believed they were well within the recently established (by progressives) standard for “this is what democracy looks like.”

Wherever you come down on how egregious their behavior was and what ought to happen to them as a consequence, we do ourselves and our nation a disservice if we try to simplify events to fit our narratives.