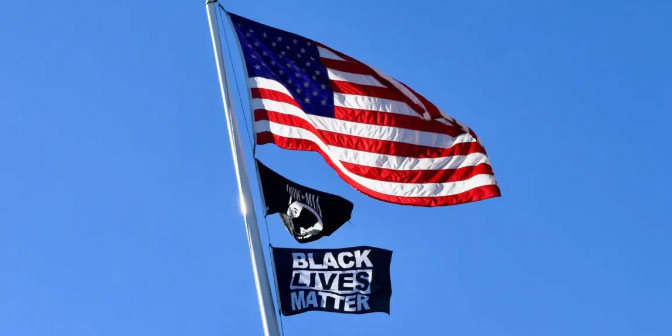 Barrington Town Council members are destroying their community for ideology.

Identity politics is a great destroyer.  Not only does it pit neighbor against neighbor based on superficial qualities like skin color, but it acts as an ideological litmus test.  To its practitioners, one either bends the knee or is non-personned as a “hater.”  Look at what’s happening in Barrington.

This is from a Sarah Doiron piece on a protest over the town’s policy of flying only progressive-themed flags:

“Flags that we have flown on town hall have been respectful of different groups and people that need protection, just like the Pride flag and the Black Lives Matter flag,” Cunha said.

[Paul Dulchinos, president of the Barrington United Veterans Coalition,] argues only four flags should be flown outside town hall. Those include the American flag, the state flag, the town flag and the POW/MIA flag.

“Our community is more divided than ever,” he said.

Barrington Town Council President Michael Carroll tells 12 News they have “chosen to fly flags which reflect the values of the town.”

Think of what Cunha and Carroll are imposing on their town so that they can virtue-signal by flying only the politically motivated flags of which they approve.  Moving forward, there are two possibilities.  One, the town’s elections will be less and less about how to manage the basic government services of the town and more and more about defining the “values of the town” along divisive culture-war lines.  Two, those who oppose the progressive line will simply have to give up and live as a silent underclass.

In a pitiful attempt to make it seem as if there’s some sort of democratic process in place, Carroll is promising a special meeting in July for the public to “state their views for or against the proposed flags,” but with a month to go before this summer meeting, there is no date, there is no proposed process for suggesting flags, and there is no process for approving them.  At best, this will be an opportunity for people within the community to gather together and be mad at each other before the council does what it has already proven it plans to do.

This is the path to totalitarianism, where by some (often bare-knuckle and underhanded) process a faction takes power and authorizes itself to proclaim the “values of the community,” which those who disagree can only work to change in the next election.  Over time, that becomes more difficult, because the ruling regime makes more constituencies self-interested in its perpetuation and manipulates the law to give itself more advantage.

American values used to be about rights and process — freedom and the rule of law.  Indeed, social progress has been made precisely because Americans have tended to resist aggregating individuals’ values to define a collective “values of the community.”  They understood that such a practice is inevitably exclusionary and divisive.