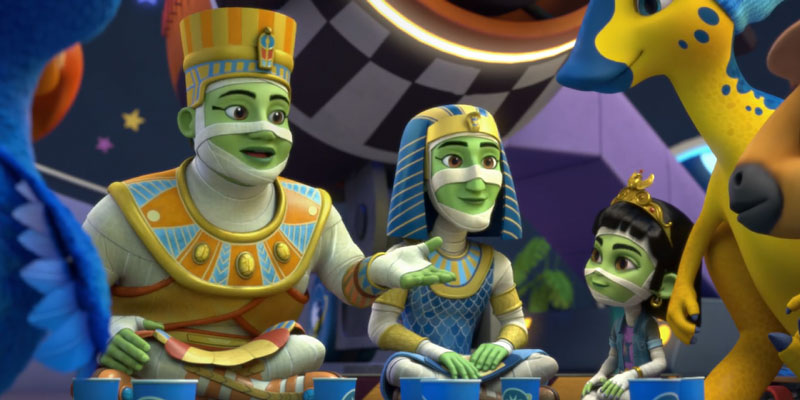 Only some facts matter when using kids’ TV to indoctrinate them.

Somehow my youngest child discovered the Netflix original cartoon series, Ridley Jones, and wanted to watch it.  Being very wary of any children’s television programs produced within the past two years, I did some research.

The premise is that Ridley watches over a museum with her mother and grandmother, and at night the exhibits come to life to play and learn lessons (more about friendship and teamwork than anything educational, it appears).  A quick online search finds happiness among leftist parents that the show’s values are “progressive.”

That impression seemed mainly based on the show’s having a “nonbinary” character, but because that character is a bison, it’s not clear what practical difference that makes.  So after repeated prodding, I watched an episode with my child.

The first half involved a dodo bird who felt alone in his display because he was the last of his kind, so he kept trying to sneak into the bald eagle display.  Although that seemed like it might be a setup for a radical identity-politics lesson, I was pleasantly surprised when Ridley’s mother taught her that “facts matter” and everything has to be accurate and in its place in a museum.

This lesson only made it more perplexing, however, when the second half of the episode focused on the Egyptian mummy display.  Put aside the fact that the child mummy is green instead of decayed and wears modern clothes over her bandages.  Ridley and her museum playmates discover that she has two fathers.  (Note that parents who only see the TV from a distance might not pick up on this, because the couple looks vaguely gendered.)

Sure, as in other ancient cultures, the views of Egyptians toward homosexual acts are not entirely clear.  In general, the ancient world seems not to have held sex as such a sacred thing… or personal inviolability, for that matter.  Privileged men were often permitted to do just about anything they wanted to anybody less privileged, and sometimes they gratified each other.  But even in those cases, they held family obligations as something distinct.

In other words, facts can’t matter too much in a museum when a display includes same-sex-married Egyptian royalty… who somehow have a child together.  The decision of the show’s producers to pair these two storylines in one episode only makes it more in-your-face.  In fact, the two-dads point isn’t even the theme; the show presents it entirely as something natural, although the girl mummy gushes about how great it is not having a mother.

The point seems to be to manipulate children, behind their parents’ backs if necessary.  Contrast that with the way children’s shows addressed social changes a couple generations ago.  They were acknowledged as different and explained, not treated as if they represented no change and couldn’t possibly be controversial.  The latter is indoctrination.

That being the case, we won’t be investigating what other historical and natural “facts” the show seeks to promote among small children.