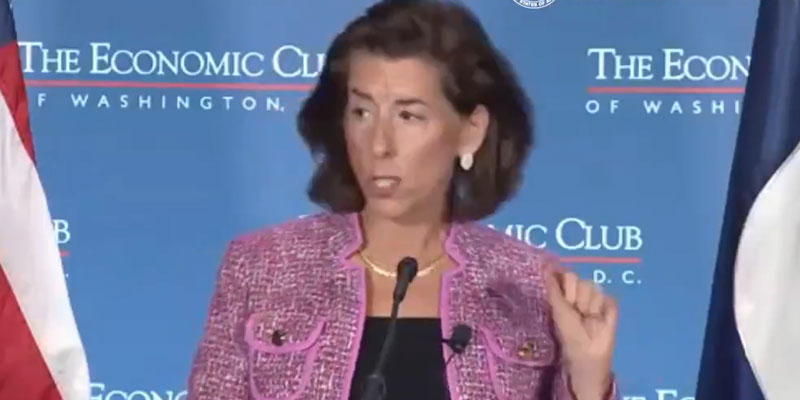 To be honest, there isn’t much content to the topic, yet, but Rhode Islanders may find themselves triggered by the Epoch Times’ headline on a Reuters article featuring our former governor, Gina Raimondo:  “US Commerce Chief to Push Investment in Domestic Economy.”

“For America to compete globally, we must invest domestically—in American workers, American businesses, and American innovation,” Raimondo will say at the Washington Economic Club, according to excerpts from the speech. …

Raimondo’s prepared excerpts say she will argue China’s R&D spending requires a response: “We must expand R&D investments and move innovations from the lab to the marketplace at 21st century speed.”

This may sound encouraging to conservative ears, but it requires some translation.

In the Ocean State, we know from painful experience that when Raimondo talks about “investment,” she means giving government more leverage in the economy.  As an “investor,” a Raimondo-style government isn’t expressing confidence in you so much as confidence in bureaucrats’ ability to manage you.

She’s precisely that sort of progressive who thinks we must compete with China by becoming more like China, which is to say centrally managed.  An “investment” in workers means telling them what jobs they should take.  An investment in businesses means government picks favorites with whom to work (with a nice little boost taken off the top for the politicians’ careers).  An investment in innovation means government officials will tilt the playing field in favor of ideas that they like or that interest them.

That is not and should not be how America functions.  Moreover, it isn’t a strategy by which we’ll be able to compete.  Even if (in theory) the Chinese Communist approach works for China, it won’t work for America because our culture and systems would require an impossibly radical change to make it function.  The resistance alone will doom the effort, and time and propaganda spent cracking down on the regime’s domestic enemies will undermine the cause.

“Gov. Roe v Wade’ Raimondo is a socialist/Marxist like her boss jack ass Joe.
they are financing their march to their Socialist Republic of America with our taxes.
She has had experience governing the Socialist Republic of Rhode Island
Socialism/Marxism is the centralization of power in the federal government which
is against the 10 Amendment to the US Constitution!

Rhetoric and reality have become two different things with Raimondo and the Biden administration. – Anchor Rising

[…] the Reuters article I mentioned the other day, U.S. Commerce Secretary Gina Raimondo was so bold as to say […]