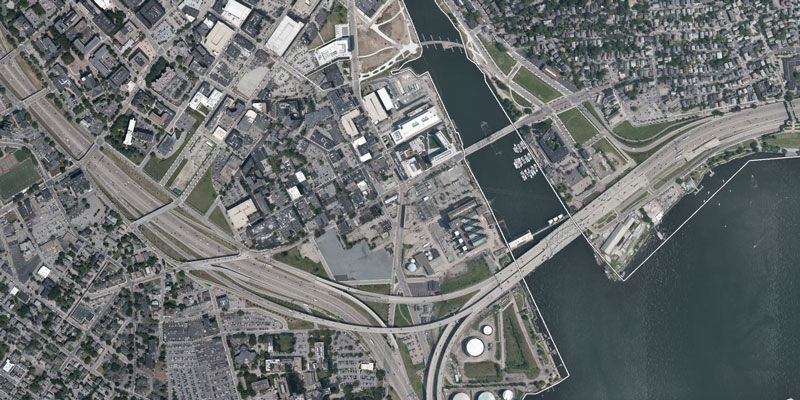 The Unsurprising Wasteland of I-195

Where does one begin to assess Steph Machado’s update on the development of the land that the government freed up in Providence by moving I-195?  (“Development” might not quite fit, since 80% of the land is still available for sale.)

One approach is to think about your own life and all that has changed in the decade since the state government decided to go into the development business.  In October 2011, I wrote on Anchor Rising that it was a mistake to try to run the government as a giant corporation, picking winners and losers and trying to conform land to a vision crafted by politicians and connected “stakeholders.”  Between then and now, I transitioned from construction work to the RI Center of Freedom & Prosperity and now to trying to build something new and different.  And still the “I-Way” land sits there, vision unfulfilled, with fulfillment nowhere in sight on the horizon.

An entrepreneur I know was offered free space in the Wexford building, which “most closely fulfills the original goal of the 195 District” according to Machado.  She turned it down.  The location and facility simply don’t suit her needs.

The government isn’t well suited to make these kind of decisions and investments, or to manage the projects.  Trying to deflect from his culpability for setting the flawed plan in motion, former Governor Lincoln Chafee tells Machado:

Those sale prices are “ludicrous,” argues Chafee, who was governor when the commission bought the land and envisioned higher sale prices.

“We’ve only gotten a pittance of what it’s worth,” Chafee told Target 12 when reached by phone earlier this month. “Play hardball and get the market value.”

That’s not how any of this works.  Government can “play hardball” only where it can force people to do things (which is why it’s dangerous to make it a giant corporation).  “Market value” isn’t some hard number in nature that exists inherently in a thing; it depends on the value of the thing to potential buyers.  You don’t play hardball to “get the market value”; you can only play hardball to drive the market value up when the thing is worth more to a given buyer than selling it at that moment is worth to you.  It helps if multiple buyers all want the same property, which in this case means the government’s “vision” can’t impose too many restrictions on the visions (or the options for hiring builders, for that matter) of the people shelling out the money.

Instead, you get the current head of the 195 Commission Chair Bob Davis proclaiming in the news media for all to hear:  “We want a lab building bad.”  When that’s the case, yes, you might have to sell the land for as little as $1, and you’ll certainly flip the leverage around.  The state is acknowledging that the land itself is worth less to some potential buyer than the development itself is worth to the government.  That means the developer has all the leverage for hardball, to offload risk and extract guarantees at taxpayer expense.

Naturally, these games are much easier to play when officials can count on taxpayers to pick up the $10 million annual tab to pay off the debt that allowed the purchase of the land as an “investment.”  As Machado reminds us, the government was able to issue the bonds for that debt without voter approval because they were structured as “revenue bonds.”

That means politicians locked the people out of the decision by pretending that they wouldn’t need to use tax money to pay it off because it would pay for itself.  It also means lenders got a higher rate of return because of a (purely theoretical and actually fictitious) risk that the government wouldn’t pay them back if the revenue came in less than expected.

All around the boardroom, everybody makes out.  Politicians get to sell favors and pretend to be savvy businesspeople.  Investors get a boost for pretending that there’s risk.  Union leaders get to promise their members that work is on the way.  Any developers who were going to buy land in the area or whose projects are too risky to attempt without massive subsidy get a big break.

And you?  You get to pay the bill.

Government should focus on its basics to maximize the Internet (and utilities) in RI. – Anchor Rising

[…] won’t be able to sell Rhode Islanders on some flashy new thing that they caught up (like the 195 land).  They would also create risks for established players like National Grid and Cox Communications, […]