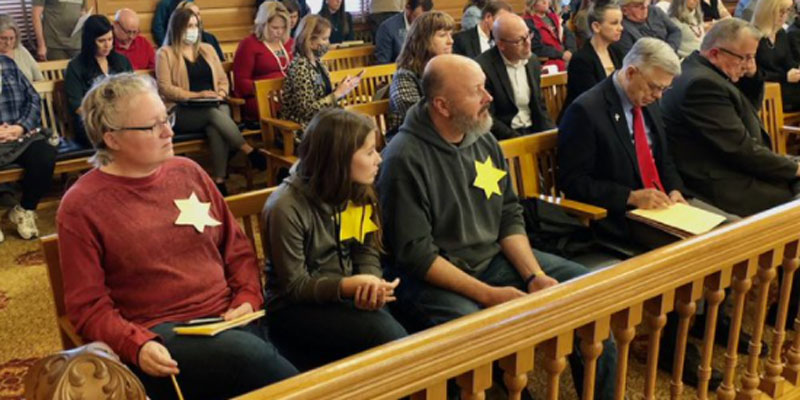 Historical analogies for the hated other.

If history repeated with a twist, would you notice?  I’ve wondered that often, over the years, and have marveled how difficult it seems for people to spot trends and recognize analogies.

A recent example came courtesy of Paul Dion when he commented, “Absolutely disgusting,” while sharing a tweet by “they/them” California techy Chad Loder:

In Kansas, anti-vaxxers are showing up to municipal meetings wearing yellow stars, portraying themselves as having equal footing with Jewish victims of the Holocaust.

Note that the people pictured in the featured image of this post would probably be more-accurately termed “anti-mandaters.”  Note also that it is unjustifiably tendentious to say they’re claiming to have “equal footing with Jewish victims of the Holocaust.”  This is true, first, because a warning about an extreme is not a statement of equivalence and, second, because the yellow-star patch was a warning about how marking and othering people can lead to atrocities, not a claim of atrocity underway.

Loder — a man of such apparent integrity that he blocked me shortly after Dion and I exchanged a few measured points in dialogue — proceeds to insist that “these people… need consequences for their dangerous, hateful, antisocial behavior. Name them and shame them and banish them from polite society.”  He then shared a link for the purchase of bear spray, suggesting that readers should “protect yourself and your family from these animals.”  (Which, to be clear, Dion explicitly disavowed when I pointed it out to him.)

I pause in this writing to marvel at the sheer zealotry and blindness of Loder’s thread.  He is calling for the banishment and chemical spraying of people because, in speaking up to defend their rights (as they see them), they are making a direct reference to a disfavored minority who were “named, shamed, and banished from polite society” before being killed, often using chemical sprays.

Who is the dangerous fascist in this scenario?

Writing for American Thinker, Andrea Widburg lists some of the ways in which people who aren’t vaccinated against COVID are being cut off from services and freedom around the planet, including from medical care.  Her closing paragraph is especially relevant to the point that history is always analogous, not precisely cyclical:

… We have become a world of extraordinary cowards, so isolated from risk that even a statistically minor risk turns us into quivering masses of fear who will hand over every vestige of liberty to people who have proven, over the last almost two years, incapable of keeping us safe.

Back in 2004, thinking through the rhetoric with which advocates were promoting research to “cure death,” I suggested that the rewards of victory might not be what the advocates expected.  Indeed, they might look more like consequences: “When one can tally infinite years in a currency of pills, the barrel of a gun or, for that matter, blockage of the medication will see a rise in premium.”  That is, the more control we gained over common, natural causes of death, the more frightened we would become of that which could still kill us, leaving us vulnerable.

Geopolitical events and economic challenges had left Germans vulnerable to those who would whip them into an oppressive frenzy.  A similar frenzy can certainly arise when the perceived vulnerability is to a virus.

The Devil is not so foolish as to take the stage wearing the same costume twice, but by his works, we may know him.  When people warn us of a familiar, sulfurous smell, we do better to wonder what their noses are picking up than to be the forces who make their warnings come true.

I’m curious what part of the story prompted your exclamation.