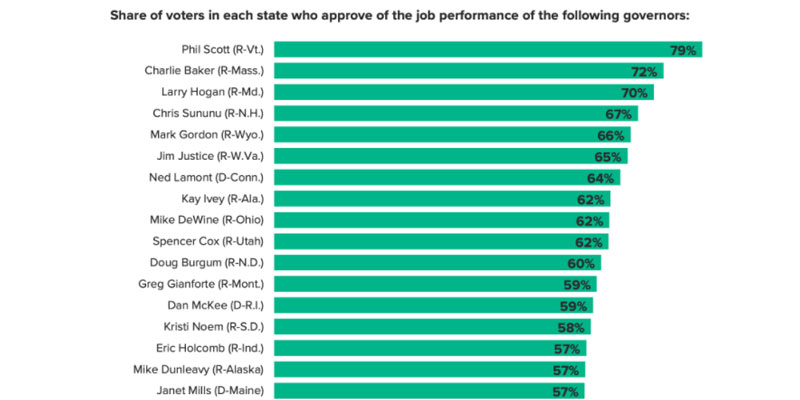 New Englanders seem to approve of their governors, lately (especially Republican ones).

During our weekly conversation on Monday, John DePetro and I had some mild disagreement about how one might explain the most recent results of Morning Consult’s regular ranking of U.S. governors’ popularity.

The headline for Rhode Island is that Governor Dan McKee is the second-most-popular Democrat governor in the country (at thirteenth overall), behind Connecticut’s Dan Lamont (at seventh overall).  This represents quite a reversal from the same poll in 2019, when RI’s Gina Raimondo was the third-least-popular governor in the country, with Ned Lamont almost as low, at fourth-least-popular.

During our radio segment, I observed that New Englanders seem relatively easy to please when it comes to their governors in this poll.  Even at thirteenth in the country, McKee is still the second-least-popular governor in our region, besting only Maine Democrat Janet Mills… and she’s seventeenth-most-popular.  That is, the governors of all six New England state are comfortably near the top of the list, as follows:

John raised the excellent point that Morning Consult’s polls are ongoing and cover large spans, with these scores reflecting voter opinions all the way back to July 21 and up to October 20.  During the summer, there was a bit more jubilation about coming out of the COVID lockdowns, and Joe Biden hadn’t yet cratered with his mishandling of Afghanistan, inflation, and so on.

Maybe we’re both right, to some extent.

Looking back to 2019, New England’s Republican governors were still in the top five: Baker was third; Scott was fourth; and Sununu was fifth.  This was in stark contrast with the Democrats, who were all in the bottom seven: Raimondo was third worst; Lamont was fourth worst; and Mills was seventh worst.

Indications have been over the past couple years that people in the Northeast have, unfortunately, wanted the heavy hand of government during the pandemic.  (Optimistically, we might say that they were sold on it, but that’s not much better.)  Democrats may also have been riding the sugar high of defeating President Trump still in early summer.

The question going forward, as Biden tanks, COVID recedes, and New Englanders can go back to assessing their governors based on the job they’re actually doing running their states, is whether our Democrats return to their place at the bottom of the list.  If they want to avoid that fate right before an election, perhaps they should ask themselves why their Republican peers do so well.

[…] I’ve thought about it, this morning’s post on New England governors’ poll results ended a bit short.  I closed with a suggestion for […]