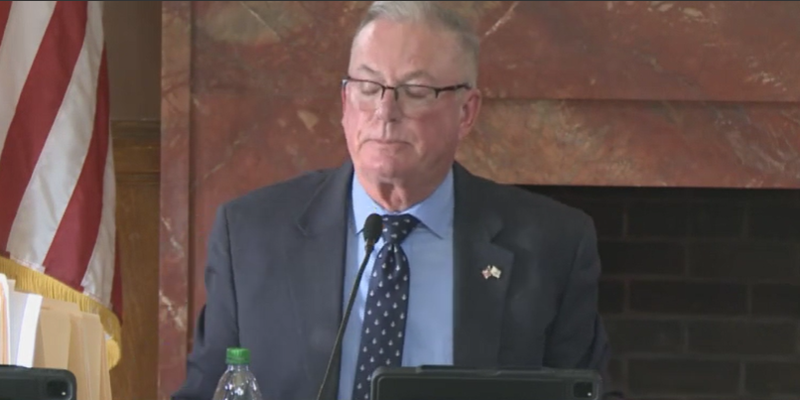 Rep. McNamara should step down.

There isn’t anything redeeming about Democrat Representative from Cranston and Warwick Joe McNamara’s highly inappropriate abuse of his position as Chairman of the House Education Committee to posture politically over legislation from Republican Representative Patricia Morgan (West Warwick, Coventry, Warwick), captured in this video clip:

On first pass, the unprecedented attempt to give Morgan “the opportunity” to withdraw a bill during the hearing is exposed as pure showboating.  More importantly, McNamara is either lying or wholly ignorant about how the laws the General Assembly passes actually function, which makes him a dangerous person to tolerate in public office regardless of his political stances.

The details of the bill are incidental to this point, but for the sake of clarity, we should understand his claim.  Morgan’s legislation is an attempt to head off some of the worst excesses of Democrats’ use of our schools to politicize, racialize, and sexualize children.  McNamara’s claim is that the bill itself violates a state statute against bullying.  That’s not how the law works, and after his many years in the General Assembly, one would have expected McNamara to know that.

Each session, the people’s representatives enact laws that (ostensibly) reflect the will of the people.  A law can be invalidated if it violates the Constitution, but one law cannot “violate” another; they are on the same plane.  If, in a specific circumstance of an actual individual who is subject to the state’s laws, two statutes appear to be in conflict, the judiciary will interpret the laws, first, to determine whether they can somehow both operate in concert and, if that is not possible, to determine which controls in that particular circumstance.

If McNamara were sincere in his strictly legal concern, he would raise the contradiction he sees and ask Morgan if there is some way to resolve the conflict within the bill.  That is what the committee process is supposed to do — gather information and revise the language in substitute bills that can then go to the entire legislative chamber for consideration.  His asking Morgan to withdraw the bill entirely, proves that McNamara was deceitfully attempting to dress his political opinion in presumably objective legal dressing.

The more divided our society becomes, the more clearly we can see the importance of process and the rule of law.  Ultimately, the only thing holding us together is the principle that we can affect the rules by which we live through a predictable process that does not privilege one ideology over another.  That principle is already fraying, and to score a few political points, McNamara gave it a whack with his rhetorical ax.

Rhode Island is fortunate that McNamara’s rhetoric is as dull as it is, but nonetheless he should step down for his assault on our most fundamental shared civic heritage.

When Rep Morgan and Joe Trillo united to defeat Alan Fung, and take away any chance of RI getting out from under Raimondo’s thumb, I was irate. However, I have since watched Patricia valiantly present bills and make comments, which support the desires of Rhode Islanders, while bucking the progressive takeover of our Assembly. She is treated like a second-class citizen by her peers, and that is shameful. She is in my prayers, because she really needs protection there, and she is a rare voice in government for We the People.