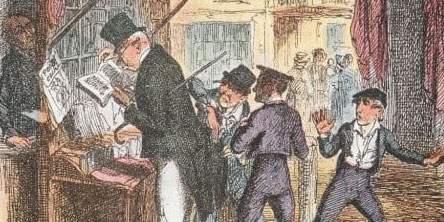 Providence’s pension obligation bond shows how civics know-how can be worse than useless to an ignorant population.

I overheard a comment on social media the other day from a Providence resident acknowledging that she really didn’t understand how the finances work, but that she was voting for Providence’s pension obligation bond because she wanted to move the city in “a positive direction.”  The problem with this common sentiment is that if you don’t understand how a policy works (let alone third-order side effects and tradeoffs), you can’t know whether it represents a positive direction.

For that very reason, the emphasis that litigious students and even Republican legislators have placed on civics education has been misplaced.  Teaching students how to be activists is dangerous if we can’t assume they already know how to figure out (and therefore have to be told) what solutions might be helpful, how to think through unintended consequences, and even how to determine what is true, in terms of both facts and beliefs.

The defined-benefit pensions that government workers enjoy in Rhode Island are guaranteed payouts from taxpayer funds.  In a perfect world, government agencies would put those funds aside (as accurately as they can predict the payout) while the person is working so the money is 100% there by the time the person retires.  However, the economies of America and the West more broadly have been on such a strong and unprecedented growth trend since the invention of market economics that it has made sense to invest that money rather than simply putting it in a vault, which allows the government employer to reduce the amount that must be saved in the here and now.

Because the payments are supposed to be absolutely guaranteed, the government should pick an investment return, when planning, that is essentially a sure bet over the long term.  Historically, this has meant between three and five percent returns, on average, every year.  In reality, Ocean State governments have planned using eight percent or more as the prediction, so even if they put in every dollar the plan called for (which they haven’t) their plans have been overly optimistic by double.  This has created an unfunded liability. In this case, “liability” does not mean the amount that they have committed to pay out in the future.  (Government agencies will go to great lengths to avoid telling you exactly what that number is.)  Rather, the “liability” is the amount of money the employer should have invested and earning a profit so it will grow enough to match obligations in the future.

Let’s put some numbers on this for illustration.  If you start with $10 and you need $85 twenty years from now, you can add just $1 per year if you plan to get an 8% return, on average.  If you only average a 4% return, however, you won’t have $85 at the end; you’ll only have $49, and you’re going to have to come up with the extra $36 somewhere else.  Now, if on top of only getting 4% returns, you also only put in 50-cents per year through year 10, you are only 60% funded, and even if you start putting in your full dollar, you’re only going to have $41 at the end.

What Providence is doing is borrowing the money to invest at a profit so that it is where it would have been if all of its assumptions had been true.  The problem is that nobody will lend money to a government for this purpose unless they are guaranteed to get more back than they put in.  So, they will demand at least the profit that the government should be using to plan its pension payments in the first place: between three and five percent.  That means the government is now obligating itself to pay the pensions, the initial amount of the bond, plus interest on the bond.  This requires either even higher investment returns.

Instead of making good use of money it has put aside for a future benefit pay-out, the government has now required itself to become a very successful investment firm.  Why does anybody think government agencies are competent in that field?

The truth is that nobody does.  Like the social media commenter, they just don’t understand how the finances work and people with a personal interest in pretending this plan makes sense are telling them that it does.  The relative handful of people who voted in favor of this plan may have just guaranteed that the city will go bankrupt, which is not a very positive direction at all.

Featured image from the original edition of Oliver Twist.