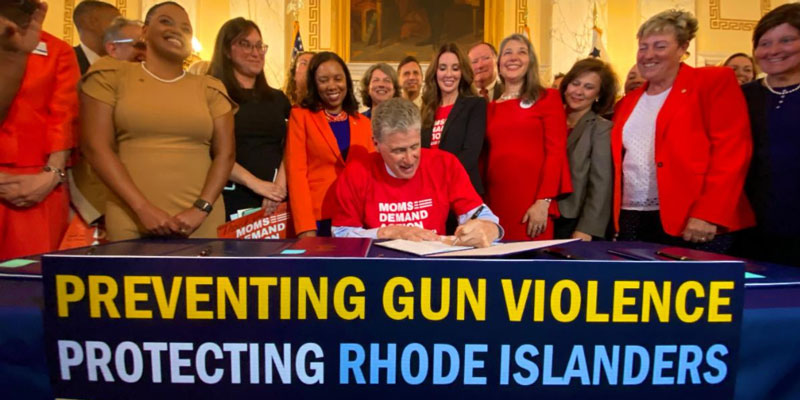 The image used as the featured image of this post shows Rhode Island Democrat Governor Dan McKee signing gun control legislation recently at the State House, and even people who support the outcome should be concerned by it.

For the good of our states and our country, Americans used to have a clear, if undefined, expectation that elected officials would maintain a line between their roles as partisan actors and as representatives of the entirety of the people.  Yes, legislation is inherently political, and signing it into law is the culmination of a political process, but it is still an official act of the governor.  Making a ceremony of such an act is not wrong, but wearing an activist’s t-shirt and sitting behind a campaign-style banner while doing so is.

Even these days, Americans display a vague preference for legislation that can at least technically (even if misleadingly) be called “bipartisan.”  By signing this legislation in this way — particularly in consideration of its implication for fundamental Constitutional rights — Governor McKee sends a signal that the people who wore yellow shirts to protest the proposals have zero standing with him as their governor.  It’s a show of contempt, and those folks — we — might reasonably feel as much contempt for the governor as he displays for us.

Having a sizable portion of the population feeling despised by, and despising, the heads of our shared government is not a healthy development, and it will come back to hurt our society, although the connection may not be immediately obvious.

Most concerning of all is that nobody in our local mainstream is offering cautionary notes, which suggests that the Ocean State is not capable of self-correcting so as to avoid the worst of the possible consequences.