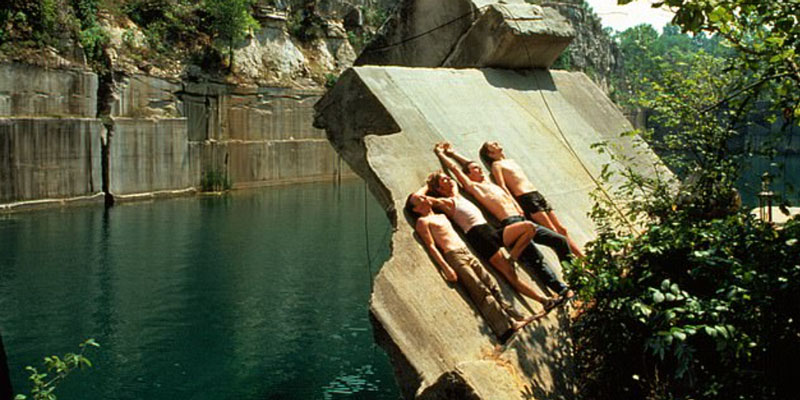 A note about being a genuine cutter…

It occurred to me — as I realized how little I’ve posted this week — that I used to be a good deal more autobiographical on this site, which makes posting easier.  To offer a summary by way of remedy, I’m pursuing an advanced degree, for which (relatively speaking) I’m of an advanced age.  Meanwhile, my paid work has increased beyond what I’d planned for my daily schedule.  That’s a welcome development, indicating a recovery from my lost job with the Center for Freedom & Prosperity last year, but it does strain my days a bit.

For some reason I cannot articulate, a very specific scene from the 1979 movie Breaking Away came to mind this evening.  The plot of the movie is less important to this post than the fact that I saw it on cable TV (remember that?) when I was a teenager.  In retrospect, thirty some years later, I’m surprised how significant the scene was to the way I’ve lived my life:

The quick summary of the relevant details is this:  The protagonist lives in a town that has become defined, within recent memory, by the college housed within its borders.  The blue-collar folks carry the label of “the cutters,” referring to the prominence of stone cutting in local industry, specifically for the construction of the college.  In the scene above, the protagonist tells his father, when asked whether he plans to go to college, that he’s “proud of being a cutter.”  His father replies:  “You’re not a cutter.  I’m a cutter.”

Somehow, sitting around watching TV (probably) on a Sunday when (probably) George H.W. Bush was President, that line in a justifiably little-known movie from the late-70s struck me with life-defining force.  The clip begins with the kid’s father talking about how much pleasure he derived from stone cutting.  “I was young and slim and strong.  I was damn proud of my work.”  How many times I thought of those words when I worked as a carpenter!  And how highly I valued the knowledge that I was a cutter — a genuine cutter, albeit of a different material.

In another scene, a young Dennis Quaid gripes about the hot-shot quarterbacks who come and go in the local college.  “They’re gonna keep calling us ‘cutters.’  To them it’s just a dirty word.  To me, it’s just something else I never got a chance to be.”

It’s been a long, long time since I watched this movie, and I think I only saw it the one time.  I remember these scenes much better than I remember the plot, but as I recall, the protagonist wants to be a professional bicycle racer and spends a lot of time pretending to be Italian.  I expect if I watched the movie again, I’d find that central pretense to be closely related to these scenes about being genuine and having the opportunity to be genuine.  To Dennis Quaid’s character, who talks about how he still feels like he has to stay in shape as a former high-school football player, the collapse of the local cutting industry took away his ability to be damn proud of his work, leaving him only to be young and slim and strong.  The protagonist’s father has become a used car salesman, with all the insinuations that implies, such that he is no longer even genuine, except as a husband and father.

Another detail I remember, because my friends and I engaged in the exact same working-class pastime, is that the kids in the movie swim in the bodies of water created by rain falling into the rock quarries over years.  The quarry is a great gouge in nature — a lake with the lines of human activity plain to see.  It is the heritage of the young cutters-in-name-only, and the privileged college kids invade even there.  The protagonist’s father asks whether his son’s friends still go there; then, “So, the only thing you got to show for my twenty years of work is the holes we left behind.”  What a great line!

I don’t remember whether the movie came to this conclusion, but these days I see it so clearly:  The opportunity to be a cutter is always there.  Cutting is doing your work and living your life well, whatever it entails.  Live it such that you squeeze the meaning from it, and the next generation wishes it had the chance to do that work!