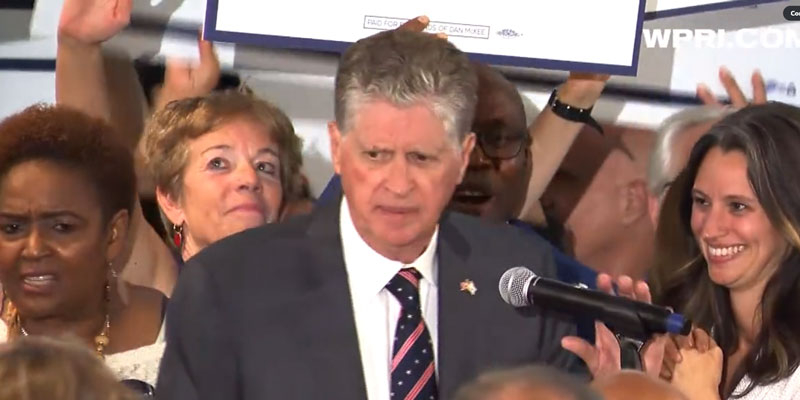 McKee has been to the crossroads.

In American folk legend, blues musicians could stroll out on a country road and meet the devil at the crossroads, where they could trade their souls for musical mastery and all the rewards that come with it.

Going back to Christopher Marlowe’s play, The Death of Doctor Faustus, and probably before, the primary moral lesson of such tales is that the bill always comes due.  Someday, you’ll be watching that last perk of success move away dissipate in the fog, and all that remains will be the obligation of paying for it for the rest of eternity.

Naturally, these stories lose much of their power as people increasingly deny that their immortal souls exist.  No bill comes due if you’re only deteriorating matter when all is said and done.  The light goes out either way, and darkness is darkness.  There is, however, another cost to the devil’s bargain, and Rhode Island’s governor, Dan McKee, put it on full display on election night:

When one of his opponents in the primary — Helena Foulkes, a highly accomplished woman — called to concede just as McKee began speaking into the microphone to declare victory, McKee shot an annoyed look at his staffer — Eva Mancuso, herself an accomplished woman — and waved her away, saying, “hang up on them.”

The moment was incredibly telling.  It should have been an easy win for him:  take the call, graciously accept the concession and compliment the opponent on a race well run, hang up, and explain to your audience that Democrats can, should, and must come together to achieve their goals.  Instead, he belittled his opponent and his staffer, both, and in the emotional moment showed his true character.

Why would he do that?  My interpretation is that he felt like this was his moment, and here was this troublesome lady, who’d had the gall to compete with him and bring up unflattering facts as part of the campaign, trying to edge in on his spotlight.

The thing is:  It wasn’t his moment.  It was the devil’s moment.  The success was not his own.  The critical factor for his victory was selling his soul (and giving away taxpayer money) to special interests, most notably Rhode Island’s extremely powerful labor unions.

The other striking image of election day was McKee standing with Patrick Crowley — arguably the most vicious radical union activist in the state for the past twenty years — who was holding a McKee sign outside of a polling place.

Until very recently, McKee was a target of the likes of Crowley based on his introduction of mayoral academy charter schools when he was mayor of Cumberland.  The unions, especially Crowley’s National Education Association, despised that move.  But that was before McKee went out to the crossroads.

As if the divine power wishes to put a fine point on this observation, Foulkes appears to have won the election-day vote.  With a single precinct left to report (in Providence, where third-place Nellie Gorbea has the lead), 26,605 people went out to the polls to vote for Foulkes, but only 26,403 did so for McKee.  Without the blessing of the labor unions and the get-out-the-vote and ballot harvesting benefits that come with it, McKee wouldn’t have won.

He’d be the guy who barely edged out a radical kid with no experience or qualifications in the race for lieutenant governor and then became governor only because his predecessor left the job to go national.  From his perspective, that moment on primary night was huge validation for him… except it wasn’t.  Getting into a position where your soul is valuable enough to sell is not a success.

Rhode Islanders should expect McKee to get worse, not better, as he moves into the general election (against another accomplished woman, Ashley Kalus) and, if Rhode Island is unfortunate, back into a governor’s office that he will then think he deserves.

McKee is the Crown Prince of condescension.