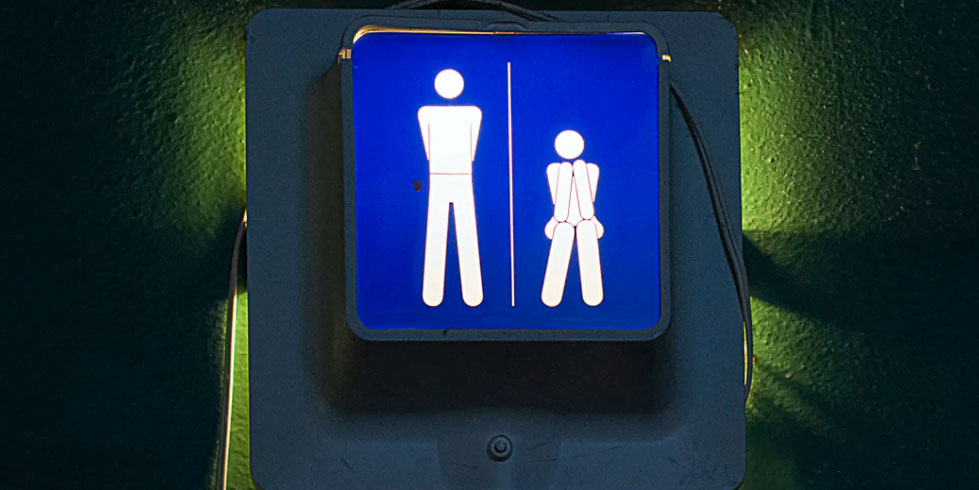 Sure we’re struggling and Providence schools are collapsing, but at least we’ll have non-gendered single-use bathrooms!

Seriously.  With all that is going on in the world and in Rhode Island, why would legislators wade into this degree of virtue signaling, as Christian Winthrop reports for The Newport Buzz?

The bill (2021-H 5741) would amend the state building code to require that any single-user toilet facility in a public building or place of public accommodation be available for use by persons of any gender by Jan. 1, 2022.

Was Edwards out a restaurant and did he have a fainting spell when he noticed single-use bathrooms with the traditional male and female symbols on them?  When he came out of it, did he whisper to those who had come to his aid, “This bigotry has to stop”?

Or was it more of a macho thing?  Was he dining with female family members when one took longer than expected to return from the bathroom and complained that there was a line for the single-use women’s room, but not for the single-use men’s room?  Then, did he valiantly proclaim, “I will solve this injustice, m’lady!”  He’s far too important a man to simply make a suggestion to the restaurant’s management like normal people would have to do.  (I have a Tiverton restaurant in mind that may have produced this circumstance.)

Motivational speculation aside, here are the real, substantive questions:  Why does this have to be a matter for state government?  Why can’t responsible adults in society solve these interpersonal matters for themselves?  Are we a bunch of whiny children?

If a business finds, on the whole, that its particular clientele prefers separate men’s and women’s rooms, it should be able to accommodate them.  If the clients have different preferences, the business can adjust, and if particular clients find this to be an egregious error, they can go elsewhere.

Maybe it’s simply Edwards trying to find ways to appeal to the far left in this day of foolish posturing.  Or maybe it’s a failure of imagination that prevents him from being able to conceive of a circumstance in which traditional practice is preferable.  Women tend to keep their public bathrooms cleaner, for example.

Or maybe the representatives are illustrating their inability to think analytically and balance competing interests.  Sure, female bathrooms produce longer lines, but that’s because they take longer.  Maybe next, Edwards should go after credit-card-only lines in stores.

Really, my fellow Rhode Islanders, we can solve these problems among ourselves without establishing the norm that a handful of people who, because they align with the right mix of special interests, are elected to a legislature can stick their fingers in every decision we ever make.