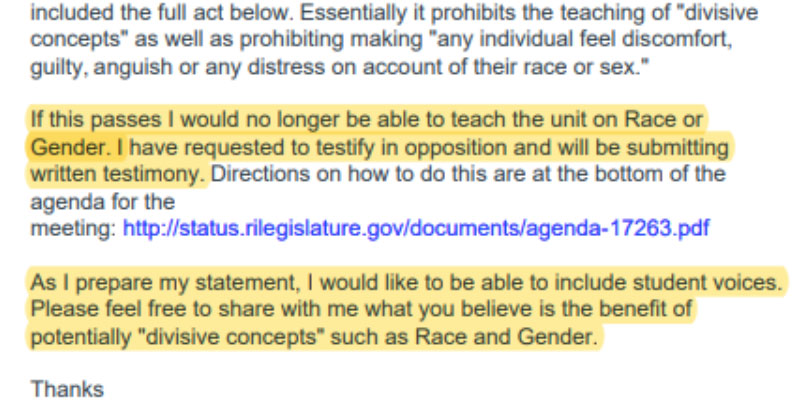 It appears from the documents that the administration was completely unaware both that students had been asked to testify on a specific bill related to education, and that they were pressured to adopt a specific viewpoint about the bill. There is no evidence that any students were asked to read the bill on which they were testifying (though it is certainly possible that some of them did.)

The social studies teacher who initiated the effort to get students to sign up to testify claims in an email to the principal that she wasn’t looking for one point of view, but it’s clear from the way the assignment was presented that she opposed the bill.

The claim of the social studies teacher, Alison Grieco, that she didn’t promote “one opinion over another one” has a slippery surface plausibility, but her email is similar to news outlets that exhibit their bias in the stories they choose.  Ms. Grieco’s email does not take a tone of simply alerting students about another interesting bill that might generate strong opinions on which they should testify; she “strongly urge[s]” students to testify on this particular bill.

Another email, from English teacher Jennifer Bergevine, goes farther.  She explains why she opposes the bill and asks for “student voices” explaining “the benefit of potentially ‘divisive concepts’ such as Race and Gender.”

Both emails are communicated to “BHS-CRC,” which stands for Barrington High School Chain Reaction Club, whose mission is “to promote kindness and compassion throughout the Barrington High School community” and “to foster the development of a culture of awareness, understanding and acceptance so that all individuals are valued and treated with respect.”

It is illustrative of the confounding and distorted language involved with CRT that a group with this objective could be assumed to oppose a bill that would ban lessons in public schools teaching that “one race or sex is inherently superior to another” and that “individual[s] should feel discomfort, guilt, anguish, or any other form of psychological distress on account of their race or sex.”

Perhaps teachers should assign an essay explaining how “kindness” and “acceptance” require the promotion of “psychological distress.”  Perhaps an essay on Orwell’s 1984 would be pedagogically helpful, too.