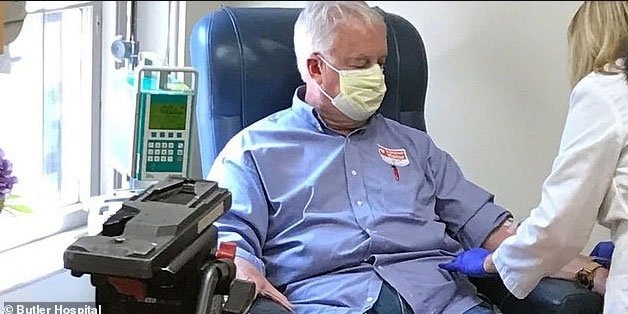 Let’s hope this Rhode Islander is at the leading edge of Alzheimer’s treatment.

Marc Archambault of South Kingstown has become the first human being to begin treatments with the Alzheimer’s drug Aduhelm (aducanumab):

Marc Archambault, a 70-year-old real estate broker from South Kingstown, was treated at Butler Hospital with aducanumab, which was approved by the U.S. Food and Drug Administration (FDA) on June 7.

Aducanumab, which is sold under the brand name Aduhelm, works by removing the sticky deposits of a protein called amyloid beta from the brains of patients in earlier stages of the age-related brain disease. ..

The authorization of the drug comes via the FDA’s accelerated approval pathway, which provides earlier access for patients with diseases that have few therapies and where there is an expectation of benefit despite some uncertainty.

Biogen still will have to run trials showing ‘clinical benefit.’ If the trials have negative results, the FDA can rescind its approval.

Controversy surrounds the drug based on mixed results during early trials and the fact that the U.S. Food & Drug Administration (FDA) ignored the fact that 10 out of 11 members of its advisory board voted against approval.

The disagreements touch on deeper debates.  Many people (this writer included) believe that restrictions on treatments ought to be loosened, especially where the disease to be treated is very harmful.  On the other hand, that right to access isn’t as clear when other people have to pay for the drugs.  As the Daily Mail article linked above notes, most people receiving an Alzheimer’s drug in the United States are on Medicare.

Process disputes aside, we can all hope the results of this experiment are good.  I’ve seen people’s lives extended by years when they managed to get into clinical trials for cancer drugs and have had reason to become familiar with other new drugs that utilize cutting edge methods.  These advancements do need some boundaries, but the blunt force of government probably isn’t the best approach.