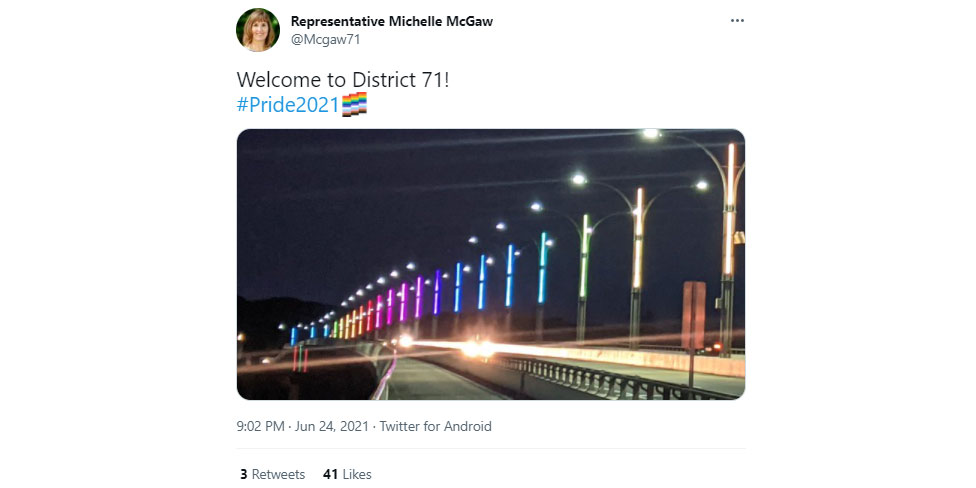 Does the use of rainbows have to be reevaluated?

Progressive Democrat State Representative Michelle McGaw tweeted something last night that raises an interesting question few discuss but many probably ponder.  As shown in the featured image for this post, she posted a picture of the Sakonnet River Bridge, apparently taken from the bike path, showing that its changeable lights were shining in a rainbow.

Naturally, she concluded that it was a statement from our government in support of Pride Month.

In fact, the “multi” color display was requested as a celebration of the Tiverton school district’s last day of school.

One can see the conundrum.  On one hand, especially given the time of year, many people seeing the lights would probably come to the same conclusion that McGaw did.  On the other hand, there may yet be some families that aren’t thrilled with the implicit association of their children’s last day of school with a social movement centered around adult intimacy.

This possibility of confusion is so obvious that one might reasonably wonder how the lighting scheme was chosen.  Why not the school colors, for example?

Progressives would no doubt take umbrage at the notion that families shouldn’t be positively thrilled to have their children’s schools associated with “tolerance,” but that misses the point.  Symbols mean something.  Indeed, the gay movement promoted the rainbow for a reason, and even people who aren’t uncomfortable with symbolic overlap in this case can appreciate that children deserve symbols of their own, not coopted for factions in the adult culture war.

The question for today is whether we’ve reached the point that rainbows are so thoroughly associated with a particular movement that it should be abandoned for all others.