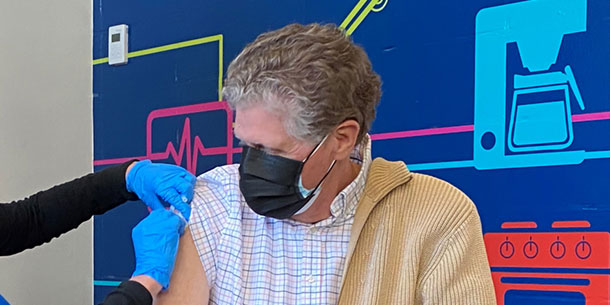 How Science Should Inform Masking and Distancing Decisions

Disappointingly, Democrat Governor Daniel McKee has just decreed (by way of a “recommendation”) that face coverings should continue to be used in school buildings — and only in school buildings.  Somebody prone to exaggerate (even if only to make a point) might call his proclamation “anti-science” because it is very possibly the opposite of a rational policy.

A fascinating article by Megan Molteni in Wired shows how foolish it has been for people to go around proclaiming “believe the science.”  Anybody who’s ever really tried to understand the risk associated with some particular danger has a sense of this, but Molteni illustrates how our current understanding of the way in which the world works is not some thorough list of unadulterated facts from which straightforward conclusions can be drawn.

The mystery at the heart of the article is how it came to be a scientific truism that particles under 5 microns could float around as airborne aerosols while particles over that size could only be embedded in heavy droplets that fall to the ground within three to six feet.

Virginia Tech grad student Katie Randall investigated references of this standard in scientific papers back to their murky pre-Internet origins, and with a spoiler alert, here is where it started:

In the words of [William Firth Wells’s 1955] manuscript, she found a man at the end of his career, rushing to contextualize more than 23 years of research. She started reading his early work, including one of the studies Jimenez had mentioned. In 1934, Wells and his wife, Mildred Weeks Wells, a physician, analyzed air samples and plotted a curve showing how the opposing forces of gravity and evaporation acted on respiratory particles. The couple’s calculations made it possible to predict the time it would take a particle of a given size to travel from someone’s mouth to the ground. According to them, particles bigger than 100 microns sank within seconds. Smaller particles stayed in the air. Randall paused at the curve they’d drawn. To her, it seemed to foreshadow the idea of a droplet-aerosol dichotomy, but one that should have pivoted around 100 microns, not 5.

In the way of disputes among experts, people coming at a question from different angles and with different incentives disputed the question for decades, forcing Wells to dig deeper and answer more specific questions that can actually be answered with specificity.  By 1962, Wells had proven that tuberculosis, which is one-to-five microns in diameter, could be airborne and infectious.  Upon reading this…

Inside Randall’s head, something snapped into place. She shot forward in time, to that first tuberculosis guidance document where she had started her investigation. She had learned from it that tuberculosis is a curious critter; it can only invade a subset of human cells in the deepest reaches of the lungs. Most bugs are more promiscuous. They can embed in particles of any size and infect cells all along the respiratory tract.

What must have happened, she thought, was that after Wells died, scientists inside the CDC conflated his observations. They plucked the size of the particle that transmits tuberculosis out of context, making 5 microns stand in for a general definition of airborne spread. Wells’ 100-micron threshold got left behind. “You can see that the idea of what is respirable, what stays airborne, and what is infectious are all being flattened into this 5-micron phenomenon,” Randall says. Over time, through blind repetition, the error sank deeper into the medical canon. The CDC did not respond to multiple requests for comment.

This is what actual science looks like.  It’s less messy than other ways of framing debates, but it’s still messy, because it’s done by humans.

In the spirit of being less messy, we have to remember that, when it comes to COVID-19, the case is very different.  The virus is 0.1 microns in diameter, so the questions are (1) whether it can survive in the air without being embedded in droplets that fall quickly and (2) whether masks therefore have any purpose.

This brings us back to the basic problem humans have with science.  The answer is not a simple, easily applied fact.  The latest consensus appears to be that an infected person can shed the virus in all the ways that human beings distribute the exhaust of their bodies.  Some particles ride the breath out on their own; others shoot out in droplets of spit and mucus.

Presumably, the bigger the droplet, the longer the virus can survive outside the body, but the less time it will stay in the air.  In turn, the longer the virus can stay in the air, the smaller it will be, and the less effective a face covering will be at blocking it.  The critical (but as-yet-unanswered) question is where virus longevity, particle size, and mask material come together in a conclusion.

An N95 mask will stop even free-floating COVID that has been in the air for a while, but that is less likely to be a live virus.  Simple cloth masks will stop the largest droplets (probably with clusters of the virus in them), but those droplets are less likely to get to somebody’s face in the first place.  (And one wonders whether the cloth would just hold the droplet until it’s shrunk enough that a breath could inhale the virus through the mask.)

Inevitably, we return to the underlying question of risk, at which point we have to remember that masks aren’t the only way to reduce risk.  Indeed, risk varies from person to person. Science, in other words, doesn’t free us of the responsibility to assess situations and make decisions.

In that context, the unintended consequences of mitigation are probably worse than the danger of the virus for people at very little risk.  Children in a relatively controlled environment like school are at almost no risk and should not be made to suffer any but the most mild restrictions and no medical mandates.  (For example: pile-on games during indoor recess.)

On the other hand, those at extremely high risk should take every precaution they can.  An elderly diabetic with an underlying respiratory disease should be vaccinated, avoid crowded places, and consider wearing an N95 mask when interacting with others indoors.  Although of course all of this must be measured against his or her quality of life, which is another consideration that is too easily forgotten.

If we pause and think about this reasonable assessment, we’ll see that we already knew this as recently as a year-and-a-half ago.  This is life, and science is just a tool to help us make it a little more comprehensible all the time, not to give us clear, enforceable rules for living.

If only McKee could be made to remember back all those many months ago.

The Rhode Island Chapter of the American Academy of Pediatrics is irresponsible. – Anchor Rising

[…] Put aside the stench of politics, however, and take the pediatricians’ statement on its own terms.  The most notable observation about it is an omission.  While the short letter takes pains to cite numbers and studies to stoke fear among parents, it offers nothing but an assertion that masking helps.  That assertion is, to say the least, questionable. […]

The Rhode Island Chapter of the American Academy of Pediatrics is irresponsible on mandatory masking. – Anchor Rising

[…] Put aside the stench of politics, however, and take the pediatricians’ statement on its own terms.  The most notable observation about it is an omission.  While the short letter takes pains to cite numbers and studies to stoke fear among parents, it offers nothing but an assertion that masking helps.  That assertion is, to say the least, questionable. […]