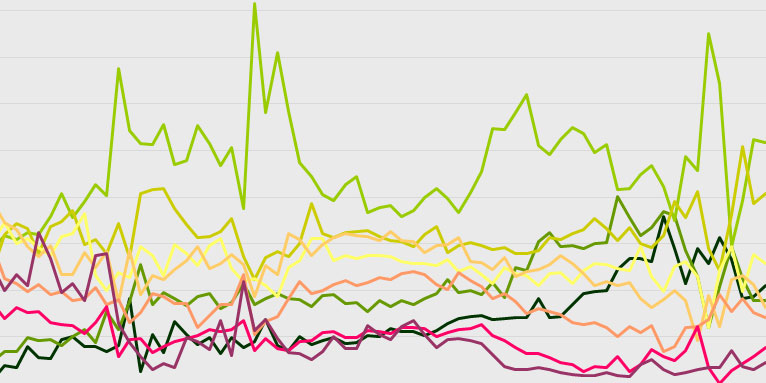 Students are preparing to head back to school next month, but a spike in COVID-19 cases among children and young adults nationwide and locally has health officials concerned.

Nationwide, children and teens represent 19% of current overall, according to the American Academy of Pediatrics, a national organization that notes infections among that age group have risen each week since June.

Message: Parents should be frightened of school and go along with any mask or vaccination mandates the public health establishment may impose.  To the contrary, the numbers just don’t justify the fear.

The following chart shows the percentage of new cases each week attributable to different age groups.  Two notes are important to keep in mind for these trends.  First, state case data doesn’t align with vaccine availability, which runs right down the middle of the 10-14 age group.  However, the numbers of vaccinated children in that group are not as far behind the numbers of vaccinated 15-18-year-olds as one might expect, so I’ve included unvaccinated 10- and 11-year-olds with potentially vaccinated 12-14-year-olds.

Second, these are percentages of the total.  The number of new cases has changed over time and is way down from where it was.  Thus, what looks like a spike in the youngest age group (black line) in mid-May, to 18% of all new cases, was only 62 cases, compared with the peak of 470 during a week in early December.  Way down.  The <10 group (black line) and 10-18 group (dark green line) climbed steadily through the remainder of the school year, but that was only because older people were being vaccinated and recovering from the virus and were therefore protected, so kids were a bigger part of the smaller pool that remained. 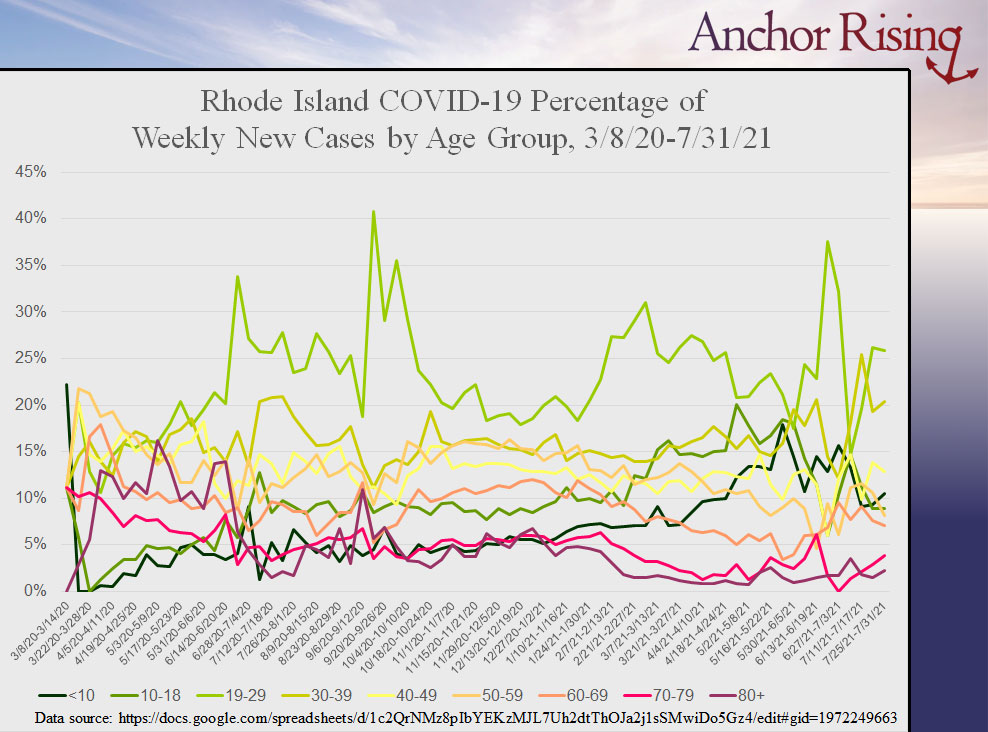 Circumstances are always subject to change, but as of this moment, the data does not reflect the anecdotal suggestions that the virus is somehow turning its focus toward children.  Without evidence in the data, there really isn’t much that can be concluded.  It’s possible, for example, that children actually do make up a larger percentage of people being infected, but they’ve become less likely to be tested because parents are immune and there’s no reason to test children with no symptoms.  That possibility doesn’t tell us much about the danger to children, because an infection with no symptoms is not a great concern.

Last July, however, the state Department of Health  published an “issue brief” reporting the numbers through July 2020, and the data currently available is through July 2021.  Obviously, looking at the data this way doesn’t give us much detail, and it won’t capture a very recent trend.  Nonetheless, we can say that the percentage of children who test positive for COVID and are hospitalized is way down. 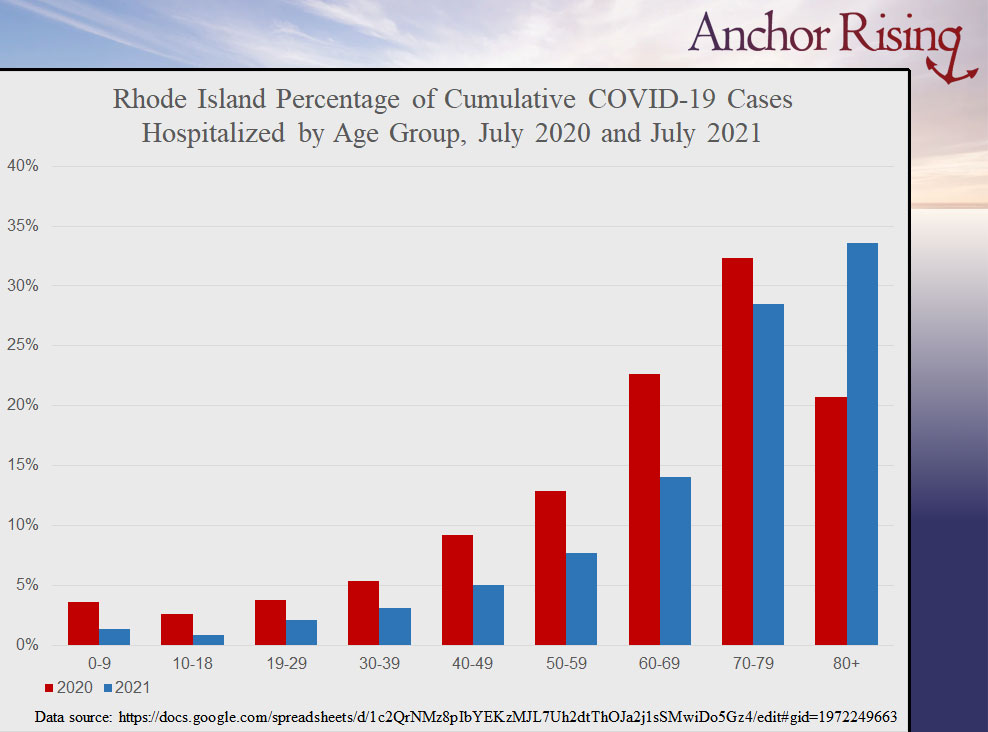 Of course, to observe this is not to explain it.  It’s possible that parents and doctors were more likely to panic and send kids to the hospital last year.  However, we have to keep the onus where it belongs.

The responsibility of proof falls on those who wish to restrict our rights and impose harmful solutions like forcing children to wear masks all day in school.  It isn’t up to those who resist these measures to prove that there isn’t a trend and that the proposed solutions wouldn’t work.  Rather, the advocates must prove the danger and then prove the effectiveness of their solution.  That evidence just isn’t there.

[…] A review of the data, yesterday on Anchor Rising, found no evidence that COVID is exploding among children or that those who catch it are tending to be more sick.  But given the fear-mongering in the news media and public health establishment, it’s worth asking:  Why is this the only trend that folks are digging into?  The answer to such questions seems often to be because the people who make up the mainstream media are afraid of what they might find. […]

We must demand more from Governor McKee as he grabs power. – Anchor Rising

[…] of an unproven fear.  As I’ve recently argued in this space, Rhode Island’s experience does not justify the claim that Delta is worse for kids, and some of the more concerning claims being made are based […]

[…] the documented reality that children are not at great danger from this disease (see here and here, for starters).  As part of the performance, the doctor-advocates are making the rounds for […]