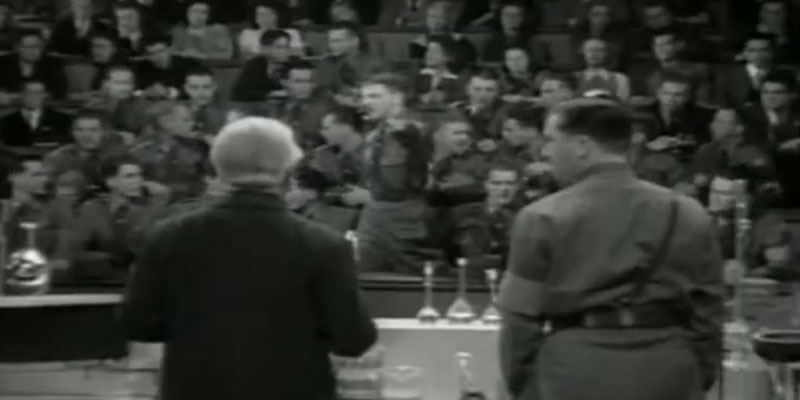 The mortal storm swells in the West, again.

Looking to cross a movie off my never-shrinking “to watch” list, last night — preferably with something inspiring and relevant to the holiday — I watched The Mortal Storm.  Perhaps in counterintuitive ways, it fit the evening well.  Indeed, this may be a movie for our times.

Released in 1940, as Nazi Germany made its way across Northern Europe, the film tells the story of the Roth family in a university town near the southern border of Germany.  The father is a “non-Aryan” (i.e., Jewish) biology professor, the two eldest sons are pure Aryan from a prior marriage, and James Stewart is a farmer and family friend who opposes Nazi rule.  News arrives on the professor’s birthday in 1933 that Hitler has been made chancellor, and the idyllic life of the family quickly deteriorates.

From this early scene to the very last, the central theme of the movie is the right of people to disagree, whatever the ruling party may declare.  The scene at the beginning of this clip has particular resonance for our times as we learn that “disagreeing” with the regime can extend to upholding objective, scientific fact:

Student and Nazi youth leader Holl: Is it your opinion that there is no difference between the blood of an Aryan and the blood of a non-Aryan?

Professor Roth: Those are the findings of science.  Until now, physiology has been unable to discover any difference in the blood of the various races.

Holl: Did you hear that?  [Angry commotion in the class.]  It’s in direct contradiction of our leader’s principle of racial purity.  It’s an impudent defense of racial degeneration, and it’s a lie!

Roth: I’ve given you the facts.  Scientific truth is scientific truth, unchangeable and eternal.  It cannot be altered to suit the policies of the hour or the clamor of immature hoodlums.

Holl: I demand that every loyal follower of our leader leave this room immediately.  From now on, this class is strictly boycotted, and those who remain do so at their own peril.

Although the increasingly mandated racial policies of our hour are directed toward different ends, the clamor of immature hoodlums is the same.

The next scene shows Professor Roth closing up his classroom in the evening, and when he turns out the lights the flicker of firelight invades the room.  Outside, students are burning books.  Holl holds up each book and proclaims the sins of its author.  As he throws it in the bonfire, the crowd makes the Nazi solute and shouts, “We burn you!  We burn you!”

The title of the movie (and the book on which it is based) comes from the idea that human nature periodically brings our species to points of frothing certainty that we must kill our fellow man to appease the angry gods of the storm.  The moral lessons of The Mortal Storm are not subtle, just as the parallels in our time are not subtle.  Let’s hope the lessons of history are fresh enough in our cultural memory to avoid the inevitable consequence of frothing certainty.

This morning I found myself in a discussion, in another forum, of “systemic” racism among our police forces. Basically, I didn’t agree. The parting comment to me was “If the jackboot fits, wear it”. I understood this to mean that if you don’t agree, you must be a Nazi. I find this more, and more, common.

It’s like a mix between a major blind spot and rhetorical trick. The blind spot is the inability to see two things that are the same in principle (wokeness and fascism) because they are different superficially. The trick is that this allows practitioners to assert that something is the same superficially so as to identify it with the maligned example.

Thus, Nazism and Wokeism share a rigid censoriousness, and if you claim that all people should be free and treated equally, the woke will say you’re a Nazi because they demand special treatment for certain groups and Nazis favored a different group.