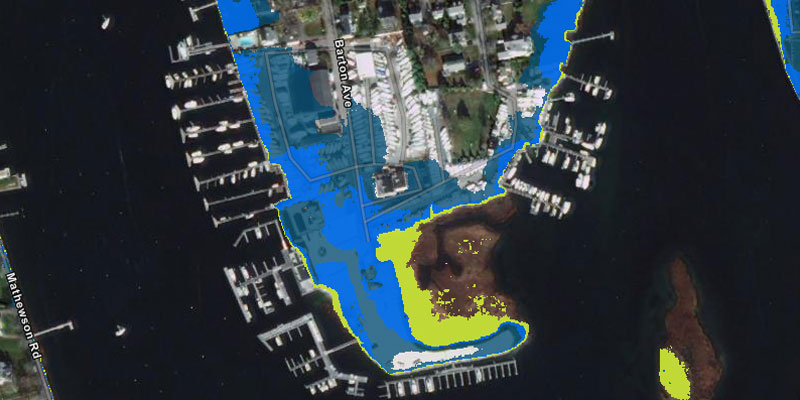 A little skepticism about sea-level scares is needed.

Have you ever seen a mainstream news report that treated scary environmental projections with even an iota of skepticism?  Consider Tolly Taylor’s report for WPRI, which bears the headline, “Parts of Barrington will be underwater by 2035, sea-level data shows.”

The first paragraph of the story gives the impression that the headline is a bit of an overstatement.  The dramatic warning is that “in just over a dozen years, Barrington will contend with several key roads flooding every month.”  That’s not “underwater,” and the statement doesn’t reflect “sea-level data”; it reflects projections:

These projections show a roughly three-mile stretch of Route 114, the town’s evacuation route, will be submerged twice a day by 2050. Teresa Crean, a coastal research associate at the University of Rhode Island Coastal Institute, told Target 12 that Barrington is one of the leaders in climate change mitigation across the state.

Crean, we learn in a parenthetical note tacked on to the article’s sixth paragraph, has just been hired as Barrington’s planner, which pays around $100,o00 per year, so she’s not exactly a disinterested party when it comes to projecting that the town has a lot of work to do (and a lot of money to spend) preparing for environmental changes.  But the personal interests of key figures in the story aren’t the only area that screams for at least a hint of skepticism.  For instance:

Rhode Island’s STORMTOOLS website shows that, because of sea-level rise that’s already occurred over the past two decades, if a storm like 1954’s Hurricane Carol hit Barrington today, it would effectively make it a series of islands.

The obvious question not asked is what Barrington looked like during that storm seventy years ago.   Carol destroyed whole towns with wind, and “a quarter of the downtown area” of Providence was submerged under 12 feet of water.  As terrible as that was and would be if it happens again, it’s not climate change; it’s weather.  And it’s not a mandate for hundreds of millions of dollars in redevelopment; it’s a reminder to buy insurance.

Here’s another statement that justifies a bit of skepticism:

Brian Thimme, owner of Bluewater Bar + Grill in Barrington, began leasing the building 11 years ago, and said he is considering buying the property. But data shows that by 2035, his restaurant will be surrounded by water.

The featured image of this post does indeed show Thimme’s restaurant surrounded by water, but according to the STORMTOOLS website mentioned above, that is the scenario with three feet of sea level rise?  Is that likely to happen by 2035?

Not at all.  In fact, a 2015 report from the statewide Division of Planning projected potentially a one-foot increase in sea levels by 2035 under its second-highest scenario.  The highest projection, which came from the National Oceanic and Atmospheric Administration (NOAA), warned that the foot could be reached by 2029.  Well, we’re at the midway point between the report’s publication date and 2029, so how much sea-level rise have we seen?  Six inches?

No.  Data from NOAA’s gauge in Newport puts the increase over the past seven years at about two and three-quarters inches.  For perspective, keep in mind that sea level can fluctuate that much month to month.  At this rate of increase, the water will have risen a foot in Rhode Island after about 30.5 years, which is within the report’s “intermediate” range.  However, if we zoom out on the chart just a little, we see that there’s been essentially no increase in sea level since 2010.  Shouldn’t the experts be asked to explain this 10-year pause before we heed their budgetary advice?

Before the pause, according to the Newport gauge, we saw about ten and half inches of sea-level rise over 80 years, which brings us back to the curious omissions in local reporting.  Why do these stories continue to center around projections?  At some point, we should be seeing documented evidence of what’s happening right now, and if it’s not there, then hundreds of millions of dollars in debt and highly paid planners might not be justified.

As local governments collect taxes and impose restrictions, residents should demand at least a regular display of evidence that the predictions are coming true.

Aren’t there any standards for checking a politician’s environmental claims? – Anchor Rising