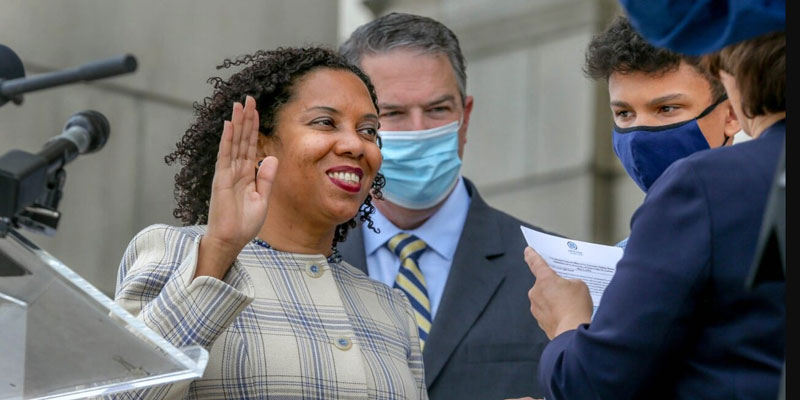 What does Matos have against the First Amendment?

No sooner do I resolve to take the summer off from social media than the Lieutenant Governor of the State of Rhode Island, Sabina Matos, decides it’s politically advantageous to involve me in her primary campaign to retain her seat.  According to her press release:

The Ocean State Current and the Center for Freedom and Prosperity gave a platform for years to Justin Katz and others who have proven time and again to be vitriolically anti-choice, casually homophobic, and unconscionably sympathetic to white supremacy.

As evidence of my iniquity, Matos (through her PR hack, Evan England) links to a tweet reply of mine to Democrat Governor Dan McKee. When a small group of far-right cosplayers conducted a pathetic few-minute protest of a reading of Communist doctrine by a pathetic handful of committed Socialists in Providence, the Governor of the State of Rhode Island made an issue of it, asking Rhode Islanders to report any wrongthink if they had “information related to this incident.”  I asked him his position on the First Amendment, which (for progressives who have lost track) is the one recognizing Americans’ right to free speech.

The tweet is actually more relevant than Matos and England might realize.  The point of the press release is that Matos is refusing to participate in a forum with her primary opponent, Deborah Ruggerio, because it is hosted by people with whom she disagrees politically.  A transparently convenient excuse, that.  Take note that the lieutenant governor only represents people who share her politics.

Matos, through England, insists that my tweet “defend[ed] the indefensible rhetoric of white supremacists.”  In point of fact, unlike the governor, I defended the right of American citizens to express their opinion.  If he and she are not willing to do the same, they have no business at all holding public office.

Predictably, a politician at sea on large issues is adrift on small ones, too.  Rhode Islanders should demand that top elected officials with influence on the expenditure of billions of their dollars should up their game.  Matos must have no case at all for her reelection if she has to look to my Twitter feed — not to mention rejection of the First Amendment — for justification.

By my comments, you mean my support for the First Amendment? Aren’t you trying to argue in another thread that your party isn’t the fascist one?

The Lt. Governor has the same 1st amendment protections that you enjoy. You don’t like the criticism, that’s all. Calling the Democratic Party fascist is just further proof of your unhinged condition

“vitriolically anti-choice, casually homophobic, and unconscionably sympathetic to white supremacy.” Let us assume that this is factual. If these were your opinions, why aren’t you entitled to them? If you choose to speak them, why isn’t that your right?

It is his right. And it’s other’s right to speak out against those comments. Particularly now at this moment in history is it incumbent on all of us to be actively involved in our communal future.

I’m thinking anyone making these comments against Justin has not fully read or understood his writings.

Phil’s been misunderstanding my writing for something like 15 years, at this point!