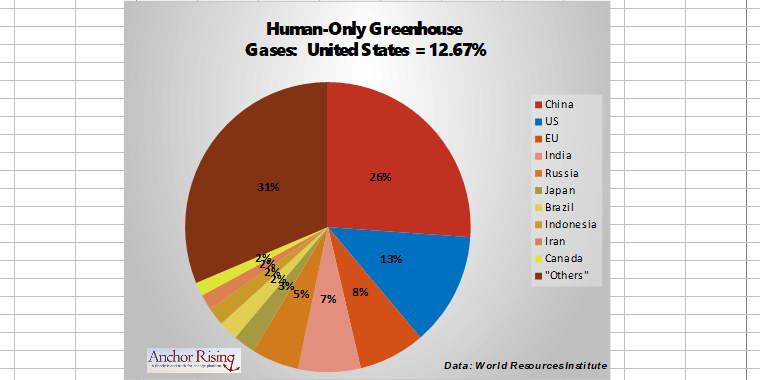 By Standard of AGW Scientists, Futile for the United States to Abate Its Modest Greenhouse Gases 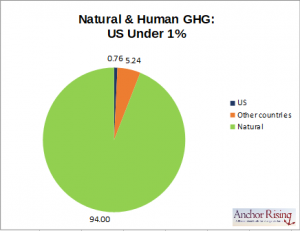 Now, AGW scientists and advocates quietly acknowledge that it would not be enough for the United States alone to abate its greenhouse gases in order to head off (hypothesized) catastrophic global warming; not even if we stop all our emissions.  But they tell us that we must set a good example to the world so that everyone else will emulate us, give up fossil fuels and thereby prevent a global warming catastrophe.

But how likely are other countries to do so?  Let’s review the list of emitters below.  Setting aside feasibility for a moment, how many other countries on it are at least willing to stop using fossil fuels given the compelling example of the United States doing so?  Canada.  Probably most countries of the EU.

Important to note, though, that Europe and the UK are being rocked by Russia’s sharp reduction in its natural gas delivery. Accordingly, at least one country has notably taken steps back towards fossil fuels and all European countries dependent on Russian natural gas are looking at staggering prices spikes in their electricity.  (Odd; why haven’t they simply cranked up their green energy production to make up for the generating capacity shortfall caused by the withdrawal of Russian gas?)

No other country, certainly none of the other three top-five emitters, China, India and Russia, is taking real steps to shut down on a broad scale their use of a widely-available, reliable fuel source.  In fact, China, the biggest emitter of greenhouse gases, continues to ratchet up its use of coal.

In short, there is no point in the United States giving up one barrel of or one joule generated by fossil fuel because, by the standard set by AGW scientists and advocates themselves, elimination of 12.67% of human emissions wouldn’t get it done.

President Joe Biden, strongly abetted by the silence or outright approval of Congressional Democrats, has paralleled Russia’s fossil fuel strangulation of Europe here in the United States by artificially restricting domestic fossil fuel production. Some states have gone further and, remarkably, passed laws outlawing fossil fuels altogether down the road. Neither the state nor the federal officials who have taken these reckless steps have identified a feasible replacement fuel source.  We have already been experiencing the corresponding spike in the price of fuel, food, goods, electricity, with a jump in heating costs on the near horizon.

Our leaders need to stop, take a breath, and be guided by the analysis of AGW scientists and advocates themselves about the (non)effectiveness of the United States reducing or eliminating its GHG. Europe’s acute electricity and looming home heating crisis as

is showing us in real time the stark consequences of moving even further away from fossil fuels without a ready, reliable, reasonably priced alternative in place.

(As of 2018.  Excludes naturally-caused greenhouse gases.) 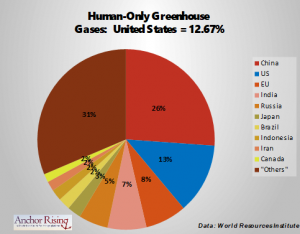 These so-called models are fake. They claim to predict the future. They can’t even predict the past. Up until the ’70’s they predicted a new Ice Age, a safe bet as our civilization is currently enjoying an interglacial. But they couldn’t gin up enough of a panic, so global warming was born. Which has been on “hiatus” for a while now, which their models failed to predict. So we are supposed to impoverish ourselves based on the bogus “Science” of failed climate models, equations, really, that tell you only what you want to hear.

If the Science of global warming is so scientific, why are they afraid to look at the sun-climate relationship? There’s a whole area of study that’s taboo. Taboo is a religious notion, not scientific. After all, it’s not as if the Sun had anything to with climate on Earth, right? And let’s not even touch the Grand Solar Minimum with a ten meter pole.

CO2 is no more a “greenhouse” gas than Nitrogen or Oxygen, but far easier to demonize. Forbidden fact: It constitutes 1/1700 of the atmosphere, by weight.

The latest candidate in our little cabinet of horrors is methane, i.e. cow burps. Funny thing though, you can’t find it in the atmosphere. This gaseous hydrocarbon is extremely volatile. The sun hits it and it oxidizes almost immediately into water vapor and, wouldn’tcha know, that ol’ debbil CO2!

So we have to kill all the farmers, obviously.

Truly we live in clown world.

All very good points. Thank you for highlighting.