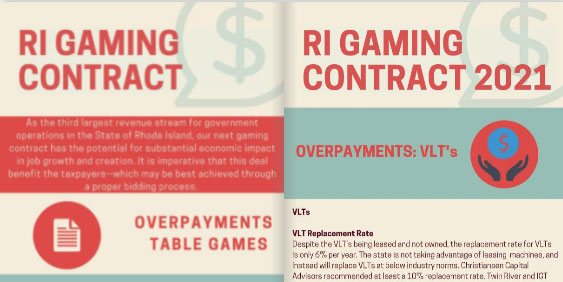 Give some thought to whom advocates are representing, whether government unions or House Republicans.

When you get one of the regular giant mailers from a cabal of government labor unions advocating for higher taxes, it’s pretty obvious what’s going on.  They want government to collect more money so they can arrange with elected officials to transfer more of it to them, with the promise that the unions will feed a good portion back to them as donations and lifelong cooperative career opportunities.

When my morning email turned up this online infographic from the Rhode Island House Republicans (embedded below) about the state’s pending deal with its casino contractors, I asked myself the same questions:  What’s going on?  On whose behalf are they advocating?

It’s difficult not to sound partisan when saying such things, but the only conclusion that makes sense is that they’re simply advocating for the people of Rhode Island.  While their products — both the casino graphic below and a related one that David Place tweeted suggesting what else the excess money could go toward — are much more informative than the unions’ propaganda, typos and marketing slip-ups like making it difficult to share links make obvious that they’re less well funded.

Progressives and other Democrat partisans will insist that there’s hidden Koch money or something, and though I’ve been about as close as can be to the pipelines that would ostensibly be bringing that largesse into the state for a couple decades, I’ve still yet to see the evidence.  Show me.

I mean, the Minority Leader in the Rhode Island House, Blake Filippi, has all of $36,402 cash in his campaign account, which went up less than a hundred dollars in the last quarter.  That, by the way, is against $77,508 in liabilities. He’s in the hole.

Or just generally look around at legislators’ jobs during and after their time in the General Assembly.  I’ll put it on the list for future research, but if you pay attention to local politics, you can say with some confidence that Democrats are much more thoroughly intertwined professionally with their party’s special interests than Republicans appear to be.  I mean, John Loughlin was a state representative for a while and even ran for Congress, and despite periodic conversations with him, I’ve seen no evidence that he’s riding on some conservative lobbying cloud or collecting consulting fees from oil companies.

So, again, what’s in it for these Republican politicians to spend time putting together research documents on relatively dull topics?

Twitter can be a good place to pick up on RI-insider mutual credulity. – Anchor Rising

[…] And yet… in a healthy civic society, a journalist would reflexively doubt the characterization of a well-paid lobbyist whose job it is to put positive spins on things of interest to his clients, leaving open the possibility that such lobbyists are doing plenty to make people feel terrible about the direction of their government.  This is especially true given the imbalance of incentives I mentioned earlier. […]