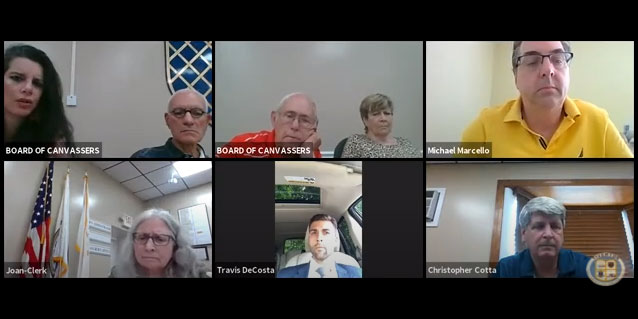 Speaking of tyranny, defenders of civil rights in Rhode Island should make a point of documenting and communicating examples.

South Kingstown has been receiving national attention recently based on multiple ways in which its school committee and superintendent have been crossing lines of propriety, but related trends bear watching across Rhode Island.  Then-Governor Gina Raimondo’s COVID-19 emergency declaration, which now-Governor Daniel McKee has refused to remove, didn’t only restrict the public’s freedom, but also increased state and local governments’ ability to avoid public scrutiny.

Those in office got a taste of an atmosphere in which they can ignore and otherwise show contempt for the people, and they liked it.

The abuse of power didn’t stop there.  On Friday, the local Board of Canvassers — Chairman Bobby Harris, Paul Amaral, and DeEtta Moran — pulled the same trick.  With no notice to three other citizens who had submitted petitions (two cosigning one of them), Marcello secretly sent a memo to the board, which has yet to be provided to the petitioners, claiming they should be blocked from the ballot, as well, despite the scores of voters who signed petitions to put them on the ballot as required by the charter.

Again, the justification was an explicit “reinterpretation” of the charter, changing the rules of the process.

This is how our rights disappear.  Government officials change rules without notice with specious legal rationale devised by a hired-gun solicitor and hide information.

One or other of these cases is likely to travel to the Supreme Court of Rhode Island, but that will take years, by which time we’ll be even further down the road to tyranny, and Rhode Islanders should be wary of counting on our judiciary to uphold the law in any event.  Meanwhile, the news media is a fading force that is largely on the government’s side and also cannot be counted on to defend due process.

The only answer is for us to be more deliberate about working together in order to push back and preserve our representative democracy.