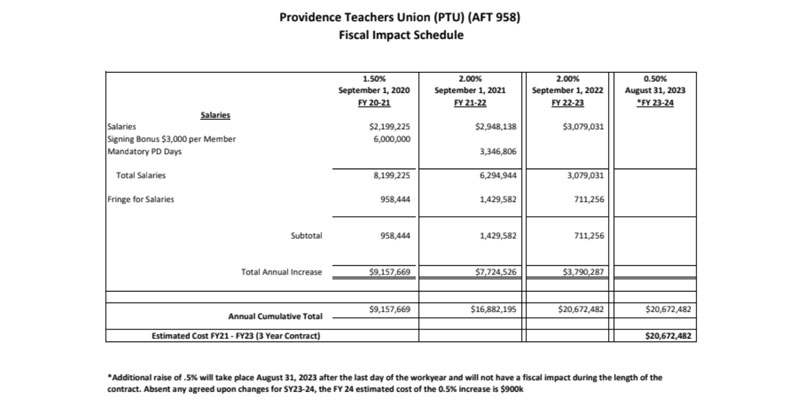 The Providence teacher contract estimate should be 144% higher than stated.

It’s a positive thing that state law requires municipalities and school districts to provide cost estimates for the contracts they’re about to approve (even if they tend to issue them when it’s pretty much a done deal), and it’s good that the state hasn’t tried to slip through a transparency loophole in negotiating its contract with Providence teachers now that it’s taken over the district.  I’ve already argued that it’s a bad contract, but couldn’t the state have provided an accurate estimate of the cost?

Dan McGowan has posted the estimate, shown as the featured image of this post, and it’s misleading to say the least.

There are basically two ways to present the cost of a contract.  You can look at the annual increase, or you can present the actual cost of the contract over the whole period — as in, how much the contract commits taxpayers to paying above and beyond what they would pay otherwise.  The estimate the Dept. of Education issued actually does neither.

Let’s assume that the annual costs are accurate.  The state shows how much more the contract will cost each year.  The analyst then made some attempt to combine that for a total, but the inclusion of a $3,000 per-teacher stipend (at a cost of $6,000,000) throws things off.  The cumulative annual cost in year two is not $16,882,195, because the stipend doesn’t recur.  The cumulative added cost for year two is therefore $10,882,195.

This error points to a bigger problem, though.  The total cost of the contract has to include that stipend, so the error goes the other way.  The state isn’t including each prior year’s boost in the current year’s cost.  Year two’s raise is only 2% above year one, but it’s 3.5% above the baseline.

Of course, then there’s the little trick of adding a half-percent raise on the last day of the contract, which this estimate tries to pass off as having no cost.  (Even trickier, it won’t appear in the cost estimate for the next contract, either.)  In fairness, you have to draw the line somewhere.  This contract increases costs forever, or at least until elected officials find the courage to start insisting on reductions, so it’s reasonable to limit estimates to one contract.

Still, if they’re going to effectively add a year of increase to the contract, it’s reasonable to ask what cost this contract of itself imposes on year one of the next contract.  By itself, the 0.05% increase would show as $966,523 as the state’s estimate presents things.  Adding in the cumulative raises and the PD days means that this contract adds $15,723,010 to the first year of the next contract.  Adding that to the total produces a total cost of this contract of $50,502,292, which is 144% higher.