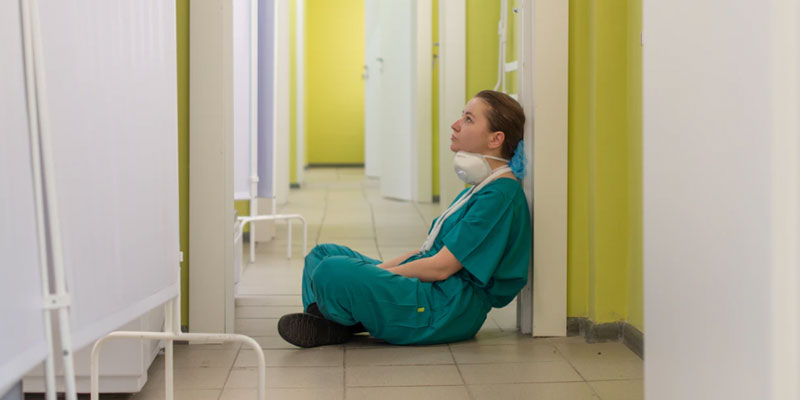 The latest argument, if I’m understanding this correctly, is that we all have to mask because the people who run Rhode Island’s health care system (including regulators and legislators) are incapable of maintaining a workforce:

“Each of the previous surges was challenging throughout the nation and challenging in Rhode Island,” said Lifespan executive vice president and chief clinical officer Dr. Kenneth Wood during a Zoom press conference held Thursday. “The difference this time is we are doing it in a setting of far fewer staff.” …

“This is one of those circumstances where I think we are somewhat obligated to try and do everything we can to try and turn the curve and flatten the curve of transmission,” said Chief Medical Officer Dr. Dean Roye.

From conversations I’ve had, my understanding is that the latest surge in COVID cases and the slip in nurse numbers has merely tipped a long-building problem over the edge.  Thus far, I haven’t been able to find a convincing story in the data, but some early observations are worthwhile.

Let’s start with the COVID numbers and the state’s “new positive cases” chart.  Despite near-total vaccination in 2021, the chart shows very limited reduction in new cases from this time last year.  (The caveat, here, is that there were a handful of days last year that spiked much higher, and we don’t know, yet, if we’ll have those days this year.)

Yet, the ratio of cases to hospitalization has improved.  If we look at new positive tests over a two-week span and compare that with new COVID-positive hospital admissions over a two-week span (with a one-week lag), the trend has been downward.  Last year, new hospitalizations were about 6% of new cases.  Right now, they’re a little higher than 4%.  The percentage of hospitalized people in intensive care or vented is about the same as last year, but obviously, that’s a smaller number.

In short, we shouldn’t be having any panic over hospital capacity.

An interesting interactive tool from the Akron Beacon Journal indicates that there’s room in total inpatient beds, although ICUs are in the red in two counties (suggesting opportunity for resource or patient sharing), but let’s take the hospitals at their word that we’re at “crisis” levels.  Why might that be?  The issue, we hear, is one of staffing, most importantly of nurses.

According to the National Council of State Boards of Nursing (NCSBN), Rhode Island currently has 27,086 people with active registered nurse licenses issued by the state.  Around this time in 2018, that number was 23,242, so it’s grown 17% in three years.

So what’s the problem?

I’m still working on the answer, but one obvious piece of the puzzle that local journalists haven’t been putting front and center is the governor’s vaccine mandate for healthcare workers.  Boston Globe journalist Alexa Gagosz tells me that Lifespan lost 1% of its workforce over the mandate, and 11 were lost to Landmark hospital.  Without context, we can just write these off as insignificant numbers, so we have to dig a little.

California has the only mandate for a nurse:patient ratio in the country, and it requires one nurse for every two intensive care patients and 1:5 in most wards.  Thus, by this extreme standard, every nurse lost (either layoff or never bothered to apply) reduced the number of ICU beds by 2 or non-ICU beds by 5.  In Kent County, 2 more ICU beds would be a 21% increase.  Statewide, it would be about a 1% increase for every nurse.  That is not a negligible number in a crisis, and as a reminder, this is assuming California’s extreme limit isn’t crazy restrictive.

But that isn’t the end of the obvious regulations.

In 2018, the state government of Rhode Island declined to update its laws in order to maintain its membership in the Nurse Licensure Compact.  Consequently, nurses in 38 other U.S. states must go through the licensing process in Rhode Island in order to work here, which directly has an effect on their ability to fill gaps and surely affects families’ decisions about where to move.  I’ve requested some numbers to help quantify the effect, but we can assume it’s not nothing.

That’s not all.  Don’t forget that earlier this year the General Assembly passed and Governor McKee signed the most demanding minimum standard for nursing home coverage possibly in the entire world.  That means a greater demand for nurses within the Rhode Island market.  People I know in related businesses have complained that they can’t hire nurses because other organizations are offering so much more money.  A candidate will accept the job and be gone as soon as somebody else offers more money.

So, at the same time Rhode Island state government is restricting who can work as a nurse, it is mandating an increase in the number of nurses needed, even as they burn out from COVID demands or directly lose their jobs because they are reluctant to be vaccinated (perhaps because they know they’re already immune from having recovered from the virus).  Although I haven’t identified them, I’d wager other contributing regulations could be found, if anybody cared to look.

And for this reason, the “experts” want you and your children to mask constantly in the hopes that it will help a little.  There’s socialism in a nutshell:  the experts can’t manage the variables, so the people are blamed for insufficient compliance.

We should respond with the obvious truth that government can’t simply will things to be.  Management means accepting reality and responsibility.

I often find myself wondering if its not an accident that these things all cumulate to the nonfunctioning of our state, hospitals, agencies, etc.. All of it is just crazy. These so called intelligent people have to know that causes have effects…

Excellent article by Justin Katz. Sadly those that can effect this nursing crises will never read it.
There’s no fixing this because the blue state government doesn’t want it fixed
More Liberties will be taken from Rhode Islanders so the powers that be increase their power and control
Black hole
Alice in Wonderland
Opposite world

[…] little bit about easing the challenge for nurses elsewhere to work in Rhode Island, echoing what I wrote in this space a couple weeks ago, although Anderson doesn’t go into the recently passed minimum staffing […]

The nursing crisis is a great opportunity to rethink our state as an on-location set for zombie movies. – Anchor Rising

[…] little bit about easing the challenge for nurses elsewhere to work in Rhode Island, echoing what I wrote in this space a couple weeks ago, although Anderson doesn’t go into the recently passed minimum staffing […]